Monk Parakeets have a different meaning to different people. The gregarious, squawk-y, vibrant species is widespread on the Connecticut coastline, especially in western areas. This is particularly true in Bridgeport, Stratford, and Milford. There is no better way to exemplify that fact than to say that during the 2009 Christmas Bird Count, the circle with the highest total of Monk Parakeet in the United States was Stratford-Milford. For residents of those communities, that is not the honor it may seem to be. I spoke with untold numbers of visitors looking for other birds while coming to see the White-tailed Kite during its stay at Stratford Point. Some people took several hours, or even more, to get here. They turned it into a mini vacation. One of the most sought after species was the Monk Parakeet.

These visitors were confused when I made a funny face at requests for their location. In turn, they often made a funny face when I told them they could be found essentially anywhere in town, and that nests were mere minutes away. You can sometimes see Monk Parakeets even at Stratford Point itself. I completely understand the desire to tick off the species. Monk Parakeets are quite beautiful birds, too. They are obviously unique and, to me anyways, a strange echo back in time to the Carolina Parakeet. However, when it comes to our area, they are equivalent to the House Sparrow or European Starling. 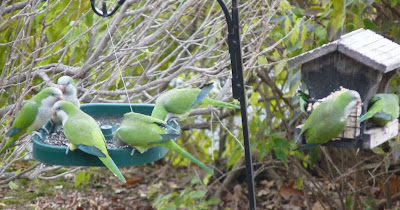 No, they are actually not my pets, but you might think that if you stopped by

The Monk Parakeet has been classified as self-sustaining. They feed, breed, and live on their own, even in the winter. Sometimes this accepted notion comes in to question for me. Already by early November, they have begun once again to stop by my feeders. When I say “stop by” I mean eat everything they see in whatever amounts they desire. They devour sunflower seed and suet to an even greater degree than the House Sparrow or European Starling. They swoop in and chase out every other native species, forcing them to wait for a meal during some of the harshest days of the winter. They are definitely not restricted to these times, and will appear in any weather. Their choice to live close to humans on the coast portrays the fact they do have a tough time getting through a New England winter. I often wonder how the group in my neighborhood would fare if all the human-supplied food were removed for one season. I hope they decide to fend for themselves a bit more this year and allow native species their place.