Canvasback — King of the Waterfowl 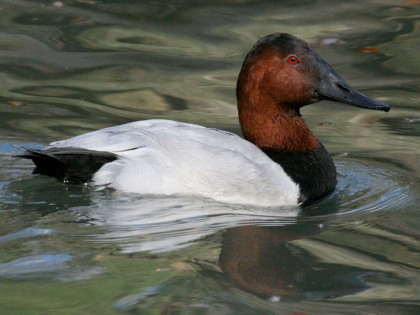 Of all the waterfowl found in North America, perhaps none are more deserving of the title King than the dramatic Canvasback. The Canvasback’s main wintering area formerly was Chesapeake Bay, where the shallow, brackish waters produced wild celery, a highly nutritious aquatic plant and the mainstay of the Canvasback’s winter diet. At one time hundreds of thousands could be found there. The wild celery diet produced a duck that was an epicurean’s delight, therefore a much desired table food during the 19th century.

Canvasback was featured on the menus of all the high-end restaurants in Washington at the time, and the King of Prussia made annual winter trips to the Chesapeake just to partake of this, the finest of all game birds.

As a result of its popularity and value, Canvasbacks were the prime focus of market hunters, who overshot this species before modern game laws. Unfortunately, the wild celery is now largely gone due to pollution and siltation of the Chesapeake, and with it went the massive flocks of Canvasbacks, which, having changed their diet to mollusks and other aquatics, still exist, but in much lower numbers. 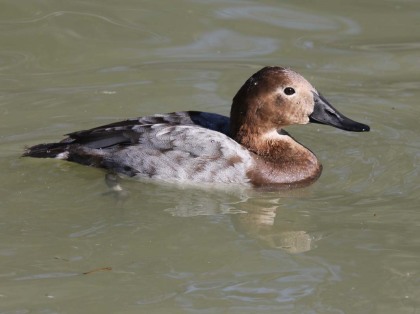 What it looks like: The Canvasback is a large diving duck. The males display a rufous-brown head and neck, a black breast and a tannish/white back (canvas) with white sides and a black tail. The female is a pale greyish brown with just a hint of pale rust on the head and neck. Canvasbacks display a rather long, sloping forehead, another good identifying characteristic. On still days, the shining white backs of the males stand out from other waterfowl which may be in the same area.

Although a rather uncommon winter species here in Connecticut, Canvasbacks can sometimes be found in small flocks, usually along the shoreline estuaries.

Sounds: Normally silent, the female can quack almost as well as a Black Duck. The males, when together frequently utter a peeping or growling note, sometimes audible on still days.

Where and how to find it: Look for Canvasbacks in brackish estuaries along the shore, during the late fall through the early spring. Usually found in shallower water, they sometimes feed in the open waters of Long Island Sound as well. Canvasbacks are often associated with American Wigeon with which they share a common diet of aquatic plants and invertebrates.

Canvasbacks are now being seen in Frash Pond at the mouth of the Housatonic River in Stratford, and in Ash Creek, south of Route 1 at the Fairfield-Bridgeport town line. The Thames River, north of New London near Smith Cove is another good location. When scanning the small groups of diving ducks, look for those large shining white backs of the Canvasbacks and you may agree with the term: King of the waterfowl.

Interesting Fact: Although in Connecticut they are found mainly along the shoreline, Canvasbacks breed throughout the freshwater prairie pothole region of North America.

Conservation Status: The IUCN lists the Canvasback as Least Concern.

This week’s Connecticut Audubon Society Bird Finder was written by Milan Bull, senior director of science and conservation, and edited by Tom Andersen, director of communications.