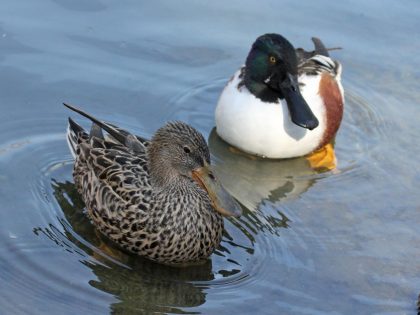 Northern Shoveler
Anas clypeata
by Milan Bull
Senior Director of Science and Conservation
One of the most distinctive of our dabbling ducks, small numbers of Northern Shovelers are most frequently seen in our area in late winter and early spring. Among North America’s duck species, Northern Shovelers trail only Mallards and Blue-winged Teal in overall abundance.

Their populations have been healthy since the 1960s, and have soared in recent years to more than 4 million birds (2011), most likely because of favorable breeding, migration, and wintering habitat conditions. Breeding mostly in the west, from Alaska down through the prairies, and wintering along the southern coast from California through Texas and Mexico, only small numbers winter up the east coast from Florida through Long Island.

What it looks like: A medium-sized dabbling duck, just a tad smaller than a Mallard, Northern Shovelers are characterized by a very long, spatula shaped bill which they use to strain the water for food. The male superficially resembles a Mallard with its glossy green head, but the white chest and chestnut flanks stand out in the field. The female resembles a small female Mallard with an oversized bill. 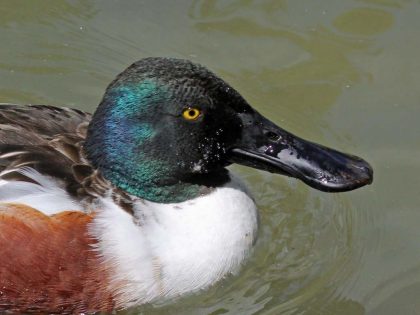 Where to find it: Shovelers are found in both fresh and salt water marshes. Lately, Shovelers have been seen at the Connecticut Audubon Society’s Coastal Center at Milford Point, and also at the boat ramp at the foot of Birdseye Street in Stratford. This week there were reports of Northern Shoveler at Fourteen Acre Pond in Norwalk.
How to find it: Look for small flocks of dabbling ducks and scan for ducks with dark heads and white breasts. Often seen in company with Green-winged Teal.
Interesting facts: Northern Shovelers, unlike Mallards, are monogamous and remain together for long periods of time. When flushed off the nest, the female often defecates on its eggs, apparently an effort to deter predators.
Photos: Carolinabirds.org