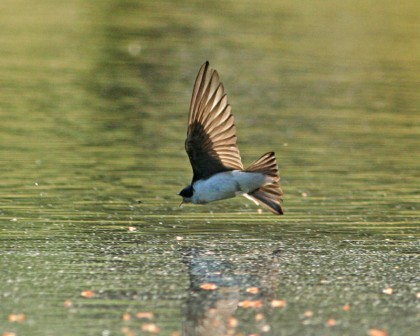 by Ben Skaught
In a few short weeks Tree Swallows will begin their southward migration, gathering near the mouth of the Connecticut River for an astonishing display of avian life. It is a spectacle that no one who is interested in birds should miss. And the Connecticut Audubon Society offers a terrific opportunity to do so. But more about that later …

Until migration starts though you can still observe Tree Swallows in other parts of the state, in open fields, over ponds or lakes, or near a nesting box. Tree Swallows breed from the tree line in Northern Canada to at least central United States and occasionally all the way to the Mexico border. In the eastern half of North America, they are the only swallow that commonly uses nesting boxes.

Tree Swallows eat flying insects almost exclusively. You can often see them over a lake or pond swooping down to capture an insect and leaving a small ripple on the water.

What it looks like: If you see a swallow that is dark above and white below, with at times a violet green coloring, here in Connecticut, then you’ve seen a Tree Swallow. Young Tree Swallows may have a brownish band on the chest. 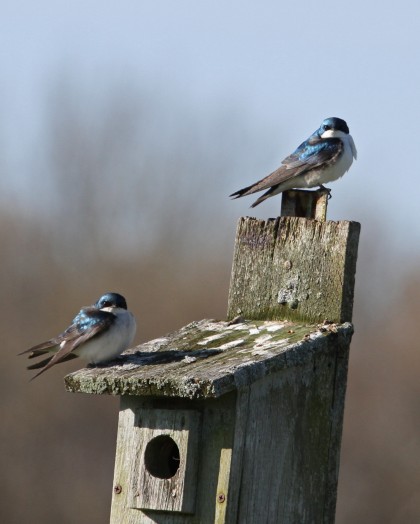 Here are some tips from Bill Thompson III, editor and publisher of Bird Watcher’s Digest, on how to differentiate the types of swallows. Barn, Cliff and Cave Swallow (a rare visitor to Connecticut) have red or orange on the throat with Cliff and Cave having pale rumps; Barn Swallows have a deeply-forked tail. Northern Rough-winged and Bank Swallows have brown above with some brown below. Purple Martins are big and dark.

The song of the Tree Swallow is three longish descending notes that end in twittering.

Fall migration: One of nature’s truly astonishing events is the annual gathering of hundreds of thousand of Tree Swallows near the mouth of the Connecticut River in fall, just prior to their migration south.

The swallows converge as dusk descends and form large clouds from which they descend into the communal roost along the shoreline. Roger Tory Peterson, who lived along that part of the Connecticut River, did not observe this event until late in his life, upon which he declared it one of nature’s greatest spectacles.

Our EcoTravel program offers cruises on the Connecticut River to see the gathering of Tree Swallows. Reservations are still available for the September 10 and September 24 cruises. There’s more information on our EcoTravel page.