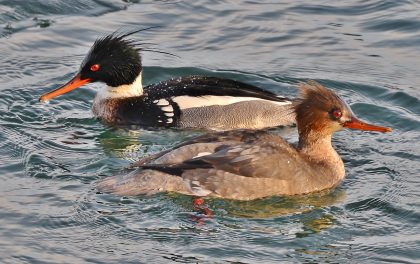 by Helena Ives, University of Connecticut
Having family based along the coast of New England and being a third generation birder, I’m always guaranteed long bird walks with equally long lists of species sighted during the holiday season.

Over Thanksgiving, among the birds we saw on trips in Rhode Island and Massachusetts, was a new bird for me, the Red-breasted Merganser.

I was familiar with the other two merganser species found in North America — Common and Hooded — and so I knew the general body shape of the group of birds we spotted. But I was excited to see the unique plumage and coloring that distinguishes the Red-breasted Mergansers from the other two other merganser species.

The birds I saw were in neighboring states, but Red-breasted Mergansers are just as common in Connecticut along the coast of Long Island Sound.

What it looks like: The Red-breasted Merganser’s distinguishing characteristics are a long neck, a scarlet bill, and a double crest at the back of the heads of both males and females.

The breeding male Red-breasted Mergansers have the rusty, black-speckled breast plumage described in their name, a dark back with long white patches along the wings, and a black and green iridescent head. Females and nonbreeding males, have a rusty brown head that extends to the back of the neck, a pale breast, and a dull grey breast, back and wings.

Where to find it: Typically staying within 20 miles of the coast, the Red-breasted Merganser has a more prominent preference for salt water, compared to the other two species of merganser.

During breeding season, the species is predominantly found in the most northern portion of North America. As fall progresses, Red-breasted Mergansers return to their wintering grounds on both the Atlantic and Pacific coastlines of North America.

Conservation status: A part of the sawbill family, Red-breasted Mergansers feed on fish and crustaceans by diving into deeper portions of coastline. Historically, humans have targeted the species during waterfowl hunts because they were mistakenly thought to be depleting populations of salmon and trout, which were sought after by game fishermen and which were actually declining from overfishing.

Today, Red-breasted Mergansers are listed as a species of least concern within Connecticut and the United States and their population is stable.

Cool facts: Although the lifespan of most waterfowl species of similar size is around seven years on average, the oldest recorded Red-breasted Merganser was a female that was at least 9-1/2 years old, according to the data on her leg band.

This week’s Bird Finder is written by Helena Ives, a senior at the University of Connecticut, majoring in natural resources with a concentration in wildlife conservation.