by Helena Ives
Once the temperatures begin to drop, the fall migration is just about over, and bird diversity in the woods drops significantly, there’s nothing quite like catching a glimpse of a beautifully marked Wood Duck passively floating on an otherwise vacant pond. One of my family’s favorite late fall, winter, and early spring activities is going on bird walks. At these times of year, we’re almost exclusively looking for waterfowl. When we’re treading lightly on our path, we come across Wood Duck often on wooded ponds with a bit of marshy vegetation.

Although they flush quite easily, Wood Duck are fascinating to observe and I have them to thank for my interest in birding. Their stunning plumage and unique characteristics instantly piqued my interest when I first came across them in a marshy, wooded wetland at Connecticut Audubon’s Bafflin Sanctuary in Pomfret when I was in high school. 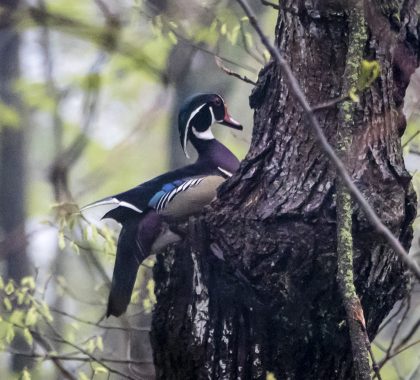 In the spring, summer, and early fall, if you aren’t immediately struck but their iridescent, crested head with clean white streaks, you’ll certainly be caught by the male’s bright red eye or bill colored with red, white, and black. Though males lose their breeding plumage in winter and become less striking, they are still identifiable by their bill coloring, the white markings on their head, and their red eyes. Females are also quite distinct with their noticeably hooded head, teardrop-shaped white eye ring, and their white wing bar among their otherwise buffy plumage.

Although they can be difficult to distinguish in low light, this species is unique in many other ways that may help you identify them. As one of the only North American ducks able to perch and nest in trees, they are likely the only duck you’ll see in the woods. Wood Ducks are also typically not fond of crowds of other waterfowl and tend to stick to small groups of other wood ducks while on the water.

If you happen to flush a group, you’ll hear the male’s thin “jweep” whistle or the female’s lower “oo-eek” call while in flight. Both of these calls are much higher pitched than most other waterfowl species, making them fairly easy to distinguish by ear.

We’re lucky to have Wood Duck in almost all corners of Connecticut year round, especially after their near extinction nearly a century ago. After decades of unregulated hunting, Wood Duck populations, and many other waterfowl species, were suffering significantly. The saving grace of this species and many others was the Migratory Bird Treaty Act, which introduced hunting regulations and outlawed commercial hunting of migratory waterfowl. 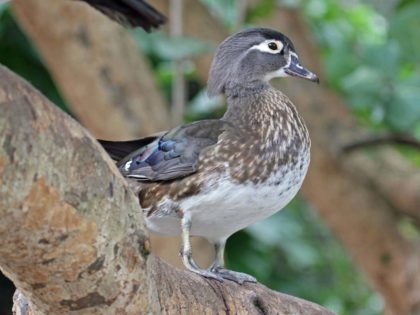 Today, Wood Duck populations are thriving in Connecticut, but rely heavily on the conservation of the wetlands they inhabit. Due to a lack of cavities in trees within or adjacent to a wetland, many Wood Ducks also rely on man-made nesting boxes. With the help of ongoing habitat conservation and management, this magnificent waterfowl  will be with us for years to come and will hopefully intrigue some future birders down the line too!

A graduate of the University of Connecticut with a degree in wildlife conservation, Helena Ives is a naturalist for the Connecticut DEEP at the Goodwin State Forest and Education Center in Hampton. Previously, she worked for Connecticut Audubon monitoring birds as part of the Audubon Alliance for Coastal Waterbirds.