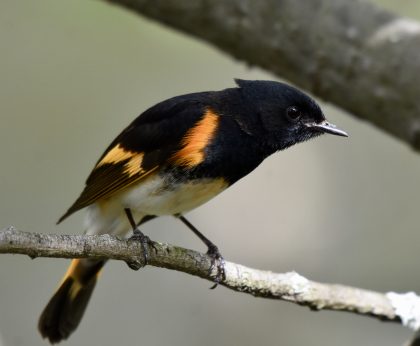 Setophaga ruticilla
Edited from a version originally published in September 2016.


The beautiful little American Redstart will be migrating into Connecticut any day now.Adult male American Redstarts are mostly black with bright orange patches on the sides, wings, and tail. The underside is white. Females (and immature males) replace the orange with yellow or yellow-orange. They have gray head and underparts, with olive back and wings and dark-gray tail. Most of the birds found at this time of year tend to be immature birds.
Where and how to find it: In spring and summer they are commonly found in young and mature forests with a good understory component. The nests are placed in the fork of a young tree often only 12 to 15 feet off the ground.

The American Redstart is pretty easy to pick out of a mixed flock. They often flash their orange or yellow tails while they feed and chase other birds around.

Conservation status: American Redstart is considered to be of Least Concern. They are still relatively common throughout their breeding range and in Connecticut specifically, although there has been a slight decrease in population according to some studies.
Contact Us
Privacy Policy       Financial Information       Photo Credits       Donate Your Car