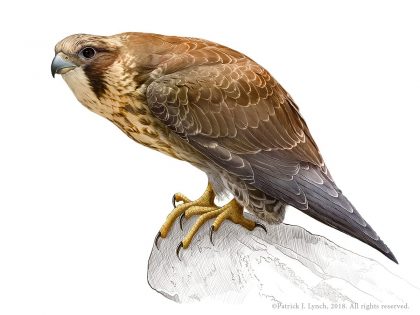 Edited from a version published December 6, 2018

by Genevieve Nuttall
Whenever someone asks me any question about the Peregrine Falcon, I immediately return a question, asking, “Have you ever seen the Planet Earth II episode about cities?”

I ask this because the episode exemplifies wildlife that have benefited from urban development, and it highlights the remarkable Peregrine Falcon. The episode shows clips of a falcon perched on a tall building in New York City and jumping off its ledge to dive after a flock of pigeons on the ground. The dive and the chase happen so quickly, but the whole scene amazes me because this fiercely wild bird is thriving in a completely built habitat.

Urban development generally pushes species out of the habitat that was replaced by buildings. There are some species like the Peregrine Falcon, however, that can adapt. Peregrine Falcons nest on and dive from tall ledges. The abundance of ledges in urban areas gives them a greater selection of nesting locations.

Now, you can find Peregrines living and nesting in urban areas throughout Connecticut.

Before cities came to be, Peregrine Falcons inhabited areas with suitable cliffs for nesting and open areas for hunting. They were often (and are still) found along the coast in Connecticut, hunting for shorebirds and nesting on nearby ledges.

Falcons may be spotted nesting on the cliff faces of East and West Rock in New Haven, the bridges in Bridgeport and the New London area, and the tall buildings in Hartford. Take a look at the center spread of the 2018 Connecticut State of the Birds report for details.

In the mid-1900s, the falcon population in eastern United States practically disappeared. As with many birds of prey, DDT poisoning caused eggshell thinning in falcons, resulting in failed nests. After DDT was banned, the only way to reestablish the population was through captive breeding programs. The falcons we see today would not be here without these reintroduction efforts.

Peregrine Falcons were removed from the Endangered Species List in 1999 and are now of low conservation concern. But it is still important to monitor falcons and protect nesting spaces that can be disturbed by human activity.

Peregrine Falcons live on every continent except Antarctica and have a unique relationship with humans. In many areas, people relied on these birds for falconry, using their expert hunting skills as a way of sustenance. Peregrines generally prey on birds but are not picky about which birds they hunt. You can see them chasing after shorebirds, pigeons, songbirds, and ducks! They dive after prey with incredible speed, sometimes reaching up to 200 mph during their pursuit.

If you have never seen a Peregrine Falcon, look for a darkly-colored raptor zipping through the air or perched high on a ledge. They have a grayish-blue back and black barring on the white underside. Their eyes are pronounced, outlined by a bright yellow ring, and the highly curved bill helps them tear at their food.

If you are lucky, you will see a Peregrine at top speed in pursuit of prey, just like the clip in Planet Earth II (and yes, it is on Netflix if you’ve been inspired to watch it).