And so ends Warbler Week, which lasted one day shy of two weeks. The Daily Bird is taking Friday, May 22, off so its editorial staff (Communications Director Tom Andersen) can participate in the 2020 Migration Madness Birdathon.

If you like The Daily Bird, visit the registration page and make a pledge in his name.

Better yet, sign up to participate in the Birdathon itself. It’s a great way to get outdoors and see birds 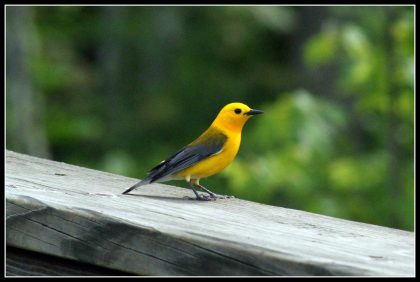 Prothonotary Warblers are relatively rare in Connecticut but one or two visit almost every year in May.

What it looks like: Prothonotary Warbler is beautiful, with an incredibly bright, mustard-yellow head, throat and belly, slate-blue wings and rump, and an olive-green back. They are a relatively large warbler at 5 and a half inches, with a fairly long black bill.

Where to find it: Normally Prothonotary Warblers spend their lives in swampy habitat (wetlands dominated by woody plants) from Virginia south to Florida. They nest in tree cavities, which is highly unusual for warblers – most weave nests on tree limbs or on the ground. Like other warblers, though, they forage for invertebrates.

Its former name was Golden Swamp Warbler, which may have been easier to understand than its present name. It was changed by the American Ornithological Union, which named the species for Roman Catholic priests who wore bright yellow robes in a bygone era.

How to find it: If it is around, it should be easy. Prothonotaries are not a particularly shy bird, and the intense yellow of the head makes it conspicuous. The male that visited our Larsen Sanctuary several years ago did not seem to mind the dozens of birders and photographers that came to observe him — nor did he seem to mind some trail construction that took place in his favorite foraging spots.

Conservation status: The IUCN lists Prothonotary Warblers as being of least concern, though wetland habitat is threatened by development and pollution throughout their range.