by Ben Skaught
One of my favorite birds, the Rose-breasted Grosbeak, returns from the Caribbean to Connecticut during spring migration. And you may not have to work very hard to find it.

As fruit, seed and insect eaters, Rose-breasted Grosbeaks may make their way to your bird feeders. Overall, their population seems to be declining in Connecticut, as the average number counted during breeding bird surveys has dropped steadily since the 1960s (typical of birds that nest in young forests or shrublands).

They are not a shy bird. The male, strikingly patterned in black and white with a rosy breast, will help build their flimsy nests (unlike most brightly colored male birds), usually between five and 50 feet above ground, in bushes or trees. 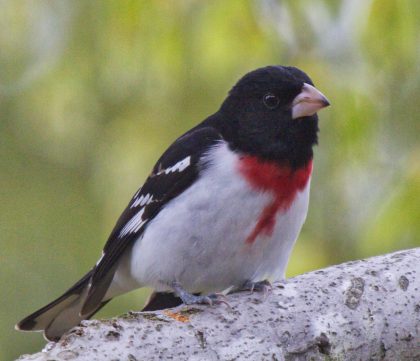 The female, with white patches on the wings, pale eyebrow and streaked breast, will sing while building the nest. The male will continue to sing even as it takes its turn incubating the nest eggs. Roger Tory Peterson described its song as like a Robin’s “but with more feeling (as if a Robin has taken voice lessons).”

The eggs are a pale blue or green with spots and blotches of brown. The young will leave the nest 9-12 days after hatching. These birds do not seem to make any effort to hide their nests from predators like snakes, squirrels, and jays and are easy targets for cowbirds, which parasitize their nests.

Rose-breasted Grosbeaks are about 7 to 8-1/2 inches long, and with their striking coloration and pale, stout, conical bills, you won’t mistake them for any other species.

Look for them in open, brushy woods and aspen groves.