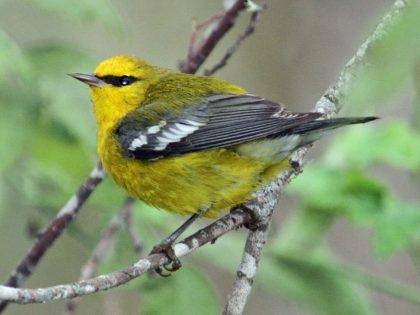 
The 2020 Migration Madness Birdathon starts Friday. We want YOU to participate! Details here.

Originally published in June 2018
by Nick Bonomo
The Blue-winged Warbler has bright yellow underparts that contrast strongly with white undertail coverts. It has a sharp black bill and a dark eye line that really stands out on its bright yellow face and crown. That yellow crown fades to a green nape and back, which itself blends into blue-gray wings that have white wing bars.

That’s lots of color for a little bird! Males and females are quite similar, with females differing only in that they are slightly duller in color than the males.

When to look: Blue-winged Warblers arrive in Connecticut in May and quickly establish breeding territories that last through July. They begin to migrate southward in August and most have already passed through the area by Labor Day.

They are perhaps most visible during summer, when males are territorial and females can be seen tending to young.

Where to find it: The buzzy song of this species can be heard from shrubby fields throughout Connecticut, often from those with scattered small trees. If you have trouble finding that sort of habitat, check powerline cuts. The periodic clearing of these cuts results in accidental habitat management for this species by keeping these open areas from reverting to forest.

In this habitat, Blue-wings are often easy to see by warbler standards because they tend to be around eye level or slightly above.

The shrubby fields that they nest in is a declining habitat in Connecticut. The Connecticut Audubon Society is managing several preserves to maintain and increase shrubby areas, for Blue-winged Warblers and other species. There are ongoing projects at the Bafflin Preserve in Pomfret, Trail Wood in Hampton, Smith Richardson in Westport, the Croft Preserve in Goshen, and the Chaney Preserve in Montville.

Conservation status: The Blue-winged Warbler is listed as a species of “Least Concern” by the IUCN, though trends indicate that this species is declining. The bird’s conservation status would change if population sizes continue to decrease over time.