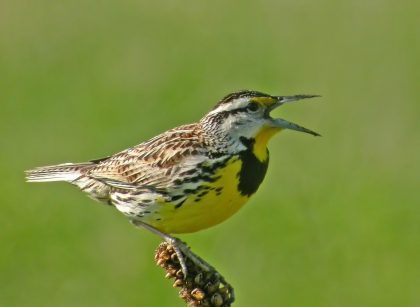 Among the most common songbirds in Harold Jones’s part of New Canaan in 1910 were Eastern Meadowlarks.

May 12, 2020 — Harold Jones was 15 years old in April 1910. New Canaan did not have a high school then, so he would walk to the Tallmadge Hill station and take the branch line to Stamford to go to school.

Harold found time on Thursday, April 7, to record his observations around his home at Waveny Farm, where his father worked as the estate’s manager. The landscape was so different then that Eastern Meadowlarks were common.

Jones’s daughter and granddaughter sent us his diaries several years ago. They give a glimpse into a far, far different world. Parts 1 and 2 are here and here.

April 7.
The chief songsters this week have been Meadowlarks, Song Sparrows and Robins. The first two species, while singing mostly before 9 A.M., may be heard at any time of the day, but Robins confine practically all of their melody to the morning and latest afternoon. The first part of the week Robins were not singing much but about Wednesday or Thursday they entered the chorus in earnest, and, I trust, will not leave it for some months to come. Phoebes and Redwings are also daily songsters, and the “whick-awhick-awhick-awhick” with which the Flickers salute each passerby forms an important, though not especially melodious, part of the day’s chorus.