In the north woods of Connecticut, a rare butterfly 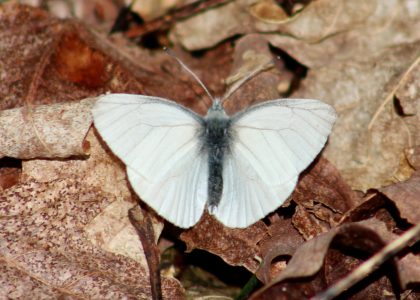 May 14, 2020 — Wandering through the Croft Preserve in Goshen earlier this month, longtime Connecticut Audubon member Jim Dugan came upon an unusual find — two or three West Virginia white butterflies, feeding in a patch of spring-beauty wildflowers.

The West Virginia white is on the wing only in spring. It is not unheard of in Connecticut but it is fairly rare — it’s easier to find further south.

A map published with the Connecticut Butterfly Atlas Project in 2007 showed it in 18 of the state’s 169 towns. The 18 include three bordering Goshen  — Norfolk, Cornwall, and Litchfield — but not Goshen itself. This map has older data.

The butterfly’s rarity is interesting of course but probably more important is that it is on the preserve probably because of the habitat improvement work there that your membership and donations have helped support.

For almost a decade the Connecticut Audubon field staff has been planning, creating, and managing shrub-scrub habitat and young forest habitat at Croft — about 15 percent of the preserve’s 700 acres.

That habitat is ideal for the rare New England cottontail rabbit. It’s essential for birds whose populations are declining statewide and beyond, such as Blue-winged and Chestnut-sided Warblers, Brown Thrashers, Ruffed Grouse and American Woodcock.

It’s a big preserve, folded into a far larger expanse of forest in the Litchfield Hills — big enough to harbor moose and black bear. Now to that list you can add something a bit smaller — the West Virginia white butterfly.