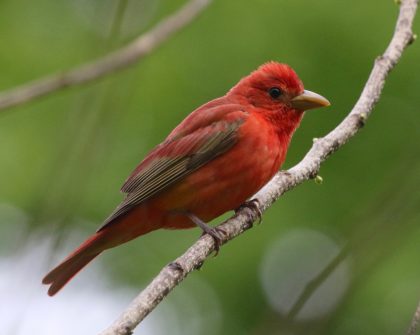 Connecticut Audubon’s third annual Migration Madness Birdathon is coming up this weekend, Friday, Saturday and Sunday, May 22-24. The weather forecast is looking OK, and 51 people have already signed up to participate.

Take a look at the list and register here. It’s free. But it’s also a way for you to be involved in raising funds for bird conservation projects all over Connecticut — an effort that the coronavirus pandemic has made more important than usual.

The Migration Madness home page has the rules, FAQ, and more; you can find it here.

Basically, every warbler was here
If Birdathon weekend is as bird-laden as the weekend just past, the species lists will be long and fascinating. You may have noticed. There were lots of birds and lots of birders around, including at Connecticut Audubon sanctuaries. Here’s what a handful of our members and friends reported:

Jill Mahar and Chandler Wiegand found Olive-sided Flycatcher and five species of warbler in the middle of the day at the Larsen Sanctuary in Fairfield, where other birders reported Summer Tanager and Swainson’s Thrush. George Amato counted a couple dozen Least Terns among many other species at the Milford Point Coastal Center.

Birdcraft Sanctuary in Fairfield is a tiny magnet for birds for migratory birds. Among the species there over the weekend were Willow Flycatcher, Northern Waterthrush, Nashville, Northern Parula and Magnolia warblers, and American Redstart and Common Yellowthroat. Birders saw Purple Martins and Orchard Oriole at Smith Richardson in Westport. 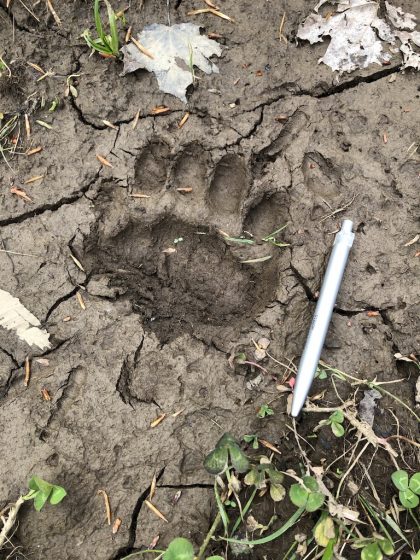 A bear track in the mud at the Croft Preserve. For perspective the ballpoint pen is about four inches long.

Aaron Bourque birded the Airline Trail, which borders our Bafflin Sanctuary in Pomfret. He reported Swamp Sparrow, and a bevy of warblers, including Worm-eating, Chestnut-sided, Blackpoll, Wilson’s, Blue-winged, Black-and-white, and Louisiana Waterthrush.

And maybe the most amazing factoid: Andy Rzeznikiewicz, our sanctuary manager in Pomfret, birded Bafflin and elsewhere in Windham County and saw 27 species of warbler. That’s pretty much every warbler you can hope to see around here in mid-May. The Sibley Guide to Birds lists 48 species in all of North America. So Andy’s 27 were 56% of all the warblers species in North America!

Rose-breasted Grosbeaks and Chestnut-sided Warblers were singing away in early afternoon yesterday at Connecticut Audubon’s Croft Preserve, where my wife and I spent a few hours. The social-distancing was easy because there were no other humans, and the non-humans, while in evidence, apparently wanted to avoid us.

Among the non-humans were the two black bears, one large and one small, that left footprints in the muddy trail. — Tom Andersen