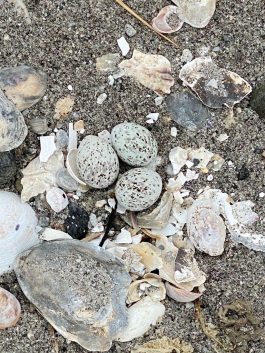 June 1, 2020 — If April is the cruelest month, May is the swiftest. I sometimes wonder if it seems that way because of the anticipation and then the brevity of migration. By June, birds are on their breeding grounds, eggs are in the nest — some have hatched — and sumer is icumen in/Lhude sing cuccu, if you’re lucky enough to have a cuckoo nearby.

These Least Tern eggs are on the sandbar at Milford Point, found by Katerina Gillis, the coastal ranger there. Take a good look because it’s best if you don’t see them in person. Along with Piping Plovers and American Oystercatchers, Least Terns are one of the key species the Audubon Alliance works hard to protect (thanks to your membership and donations).

Keeping away from the nests and the young is one of the best ways to protect them.

Tina Green, a Connecticut Auduon member who lives in Westport, reported yesterday: “After 5 long years of trying to hatch chicks at Compo Beach, the American Oystercatcher pair is successful! One chick hatched today and there’s one more egg to go. We also have a pair of Piping Plovers in the same roped off area that will hopefully be able to hatch chicks.”

Compo Beach is a popular place among Westporters. It’s been relatively empty because of the pandemic, which probably helped the birds.

Osprey Due Date
The approximate due date for the first of the three Osprey eggs at Milford Point to hatch is June 5. Here’s a link to our Osprey Cam. It will be worth watching.

For a good look at the process of monitoring nests, watch the latest EcoTravel E-Venture, which I call “Andy and Sandy Check at the Osprey Garden.” 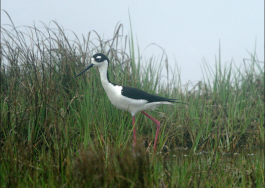 Stilts
The CTAudubon Rare Bird Alert sounded Saturday: two Black-necked Stilts at the Barn Island Wildlife Management Area, in Stonington. Matt Bell of our EcoTravel office trekked to see them, stayed til 11 a.m., and estimates that maybe 75 to 100 people showed up by the end of the day.

I asked Matt, “On a scale of 1 to 10, 10 being Townsend’s Warbler and 1 being Blue Grosbeak (which have showed up in Connecticut a lot lately), where would you rate the stilts?”

eBird says that a Black-necked Stilt settled in at Milford Point for about a week in late August-early September 2011. There have been other spring- early summer visits, in June 2008 at Old Saybrook and June 2003 at Hammonasset. Those were one-day stop-overs. As was Saturday’s. By Sunday morning, the stilts couldn’t be found.

Of course, if you didn’t know about them, it doesn’t matter how long they were there. Don’t miss out again. Sign-up for the CtAudubon Rare Bird Alert here. It’s another great thing your membership supports.

As is our blog feature, The Daily Bird. Today’s will be out later — Scarlet Tanager, featuring terrific short video by Connecticut Audubon Board member Gilles Carter. Sign up for Daily Bird texts here.

Birdathon
Check your email tonight for the announcement of the 2020 Migration Madness Birdathon winners. So many people had a good time and you can get a sense of what it was like in this account: “Birdathon 2020: “What a wonderful activity, particularly during a spring with so many challenges!”
— Tom Andersen, Communications Director