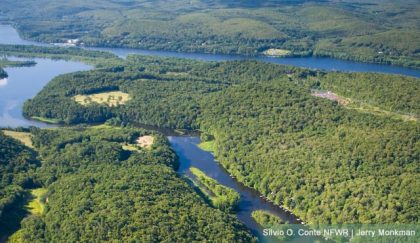 The Conte Refuge along the Connecticut River. Photo by Jerry Monkman for National Wildlife Refuge Assn

August 5, 2020, Update — The Great American Outdoors Act was signed into law on Tuesday, August 4. Details about how this will benefit conservation in general and in Connecticut in particular are below.

July 23, 2020 — Conservationists throughout the country are celebrating yesterday’s passage by the U.S. House of Representatives of the Great American Outdoors Act, which creates a permanent annual fund of $900 million for land protection and outdoor recreation.

Annual approval of the Land and Water Conservation Fund has been threatened in recent years but widespread grassroots and bipartisan support led to passage of this permanent bill in the House yesterday, a month after the Senate passed it. The bill is expected to be signed into law.

“Your support for the environment has been strong and unwavering. Connecticut’s residents and wildlife have benefited from the LWCF for decades, and now you can be assured that the benefits will extend into the future as well.”

Money for the Land and Water Conservation Fund, originally established in 1964, comes from royalties paid by oil and gas corporations for federal offshore drilling leases; the money is then allocated to the states for conservation projects.

This fund has benefited Connecticut enormously through the years. Among the projects are the protection of 875 acres by the Silvio O. Conte National Fish and Wildlife Refuge along the Connecticut River. The purchase of Calf, Peach and Menunketesuck Island for the Stewert B. McKinney National Wildlife Refuge. The permanent protection of Skiff Mountain in Kent and Great Mountain Forest in Norfolk.

Read our 2018 op-ed on the issue, from the Hartford Courant.