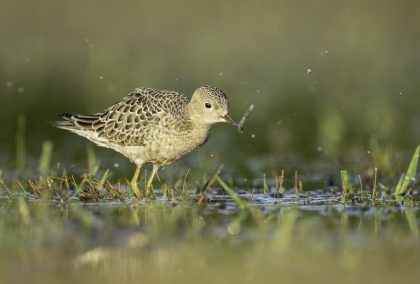 Edited and updated from a version published in 2015

by Andy Griswold
This is the time of year to look for Buff-breasted Sandpiper. Five were reported from Hammonasst Beach State Park yesterday, Friday, August 27, and one this morning at Sandy Point in West Haven.

The delicate Buff-breasted Sandpiper has always been a love of mine, unique in being the only North American shorebird to use a lek for courtship.

This petite 8.25-inch migrant is distinctly long-winged. Note its white underwing, pale buffy breast and face, yellow legs, and scaly patterned back. This distinctive, dove-like shorebird is relatively easy to identify and is not likely to be mistaken for any of its relatives.

Typically, Buff-breasted Sandpiper migrates through the middle of our country, but with regularity can be found both to the east and west of this path. Look for this species mainly in dry, short-grass habitats. This bird has been an annual occurrence at Hammonasset Beach State Park and at our Milford Point Coastal Center, where one or two are reported each year. Sod farms are ideal.

Now into the early fall is when to look for this species. Concentrate on grassy areas that may offer some damp spots after rains.

If you head out to look and don’t see it, typically you can find the other “grasspipers” in the same habitat including Upland, Pectoral, and Baird’s Sandpipers. American Golden-Plover is also a possibility.

Conservation status: By the 1920s this species had declined from numbers in the millions to near extinction. Although thought to have recovered somewhat, Buff-breasted Sandpiper is likely again on the decline.