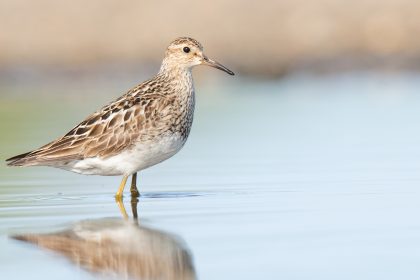 We have 300 places left for Thursday’s Shorebirds of Connecticut Zoom presentation by Manomet’s Brad Winn. Reserve a spot here.

Edited from a version published in April 2017

Where To Find It: This is an uncommon species in Connecticut, but also a wide-ranging one.

Pectoral Sandpiper favors short-grass habitats, both inland and on the coast, but it also occurs in saltmarsh and on beaches. In August 2020 they’ve shown up in Old Lyme, West Haven, and Milford, and eBird lists a couple of dozen places where birders have found them over the past decade (zoom in or enter “Connecticut” in the location box).

When To Find It: In fall — and we’re in fall migration season already — they can be found from July (or even late June) to November, usually singly or in small numbers.

In spring, April is the key month. The astute shorebird aficionado will be looking in late March, and the Big Day planner knows it will probably be gone by the sweet spot in mid-May.

What It Looks Like: The Pectoral Sandpiper is one of nearly 20 species in the genus Calidris that have been found found in North America. These include notoriously tricky identification problems such as the five small North American species known as “peep” and their small Eurasian counterparts known as stints.

The Pectoral fits the basic plumage pattern, but it’s larger with yellow legs and a distinctive brown-streaked breast pattern that cuts off sharply to create a demarcation between breast and belly. Least Sandpipers are mainly brown with yellow legs, but they’re the smallest of the “peeps,” six inches to the Pectoral’s eight-plus. In spring migration the largest “peep” — White-rumped Sandpiper — can show a similar breast pattern, but it is most common mid-May to early June while the Pectorals are mostly gone by early May. Of course other features such as the rump pattern easily separate them. 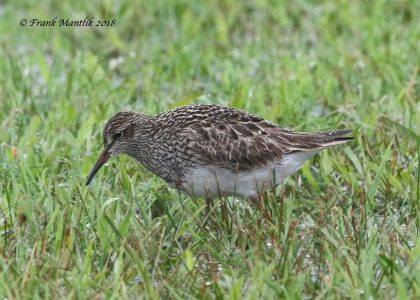 In the fall (and this pertains to all juvenile shorebirds) the younger birds’ plumage looks fresh, crisp, and bright, while older birds look more mixed, with duller feathers interspersed with retained breeding feathers. Here’s a comparison of the adult vs. juvenile.

However, abundance of breeding adults was lower in the vicinity of recently constructed roadways near oil fields. Losses of wetland feeding and roosting areas, especially along migratory routes, and probably on wintering grounds, is undoubtedly important. Little information from South American wintering areas, but not considered to need high conservation priority there.

Of Special Interest: Pectoral Sandpipers migrate southward from Arctic breeding areas in largest numbers through central North America to winter primarily on the pampas of south-central and southern South America. Most individuals that breed in Siberia migrate east, or perhaps even along the Great Circle route over the Arctic Ocean, to Alaska or Canada and then on to South American wintering areas.

Individuals at the extremes of this range potentially make a total return-trip migration of more than 30,000 kilometers, a distance comparable to that flown by the Arctic Tern (Sterna paradisaea) and other migratory champions. Small numbers winter regularly in Southeast Asia and the South Pacific, mainly Australia and New Zealand (Birds of North America Online).