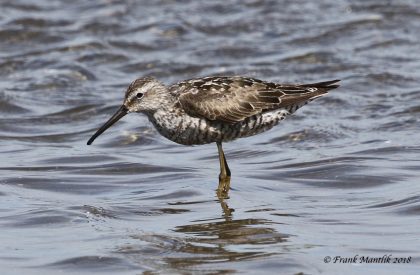 Edited from a version published in 2016You can get the Daily Bird via text by signing up here.

by Greg Hanisek, editor of The Connecticut Warbler
One of these uncommon birds recently appeared at Milford Point. In general it can be found in coastal wetlands, usually on mud flats with other shorebirds.
Although the tundra-nesting Stilt Sandpiper sometimes occurs during spring migration, typically in mid- to late May, they’re pretty rare at that time. The best time to find them in Connecticut is during fall migration, from mid-July into mid-September. They’re best described as uncommon, occurring as single birds or in small flocks.

Fallouts are possible though. On August 28, 2006, a major fallout, associated with a cold front and strong thunderstorms, occurred on the western part of the coast. Eight were found with about 200 Lesser Yellowlegs at Seaside Park in Bridgeport, and 25 were at Sikorsky Airport in Stratford along with 350 Lesser Yellowlegs.

What It Looks Like: Stilt Sandpipers are unmistakable in spring (or so one would hope). They’re strongly barred from neck to belly with a chestnut patch on the sides of the head. Some autumn individuals, especially early in the migration period (such as now) may still show these characters to some degree, but juveniles and birds in basic plumage lack these distinctive marks.

Look for a bird about the size of a Lesser Yellowlegs, but with a slightly but noticeably down-curved bill and greenish to gray-green (rather than bright yellow) legs. The pale supercillium (eyebrow) is usually apparent. Birds in fresh juvenile plumage arrive later in the fall season than adults.

How To Find It: Search through flocks of shorebirds, looking for a sandpiper larger than the peeps but smaller than a Greater Yellowlegs. The down-curve of the bill should get you to the right place in most instances, but if the bill is really down-curved, and you’re really lucky, you may have come upon a Curlew Sandpiper.

If you suspect that, start calling friends and taking pictures!

Milford Point is an especially favorable place to look for shorebirds of many species because of the way high tides concentrate them in a relatively small open area. When the tide is low they spread out more widely. But when they’re in a small area, it’s easy to disturb them if you walk too close. So watch from afar and let the birds eat and rest undisturbed.

Conservation Status: No special conservation status has been accorded to this species, nor have any conservation measures been proposed or taken. However, the species’ apparent rarity may be pertinent, according to Birds of the World Online. Habitat degradation in the Churchill, Manitoba, area has been noted as the result of overgrazing by Canada and Snow Geese.