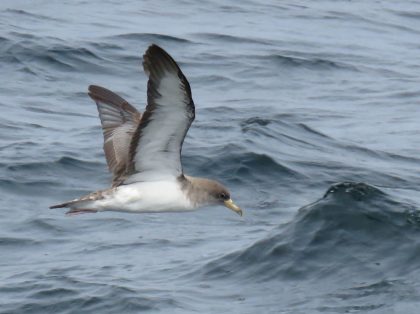 August 5, 2020 — Storms often carry rare birds into the area and, even more frequently, they push birders out of doors to try their luck at finding the rarities. Yesterday two Connecticut Audubon birders lucked out.

He got a 10-second view of the Wilson’s Storm-petrel and wrote: “Seen nearly 50 yards offshore. Small storm-petrel with extensive white on rump wrapping into the under tail. It was walking on water, with distinctive white bar on inner wing. Moving very slow, nearly hovering in place but quickly faded from view due to waves and was lost within 10 seconds.”

The Sooty Shearwater was in view for longer — 15 seconds: “Distant in good light. Small shearwater, with wings tapered to a point. Longer head projection and pointed tail. Never flapped, but quickly flew with the wind, rising high to a point with a slight pause before rapidly twisting and falling down into the waves. Multiple times it banked and showed the all dark belly and underwings with silver flashes.”

And the Cory’s Shearwater: “Large shearwater, viewed for just under a minute about ⅔ of the way to the horizon. It never flapped while flying into the wind. When it banked, we viewed either the gray upper parts with color uniform from head to back, including nape. Belly was clean white, lacking the smudginess that Greater Shearwater show. Wingtips were solid black …”

Early in the afternoon, a birder reported five Sooty Terns at Bantam Lake in Litchfield County. That’s roughly due north of the mouth of the Housatonic River in Stratford. Frank Mantlik, a member of the regional board of Connecticut Audubon’s Coastal Center at Milford Point, saw the notice and made a plan. 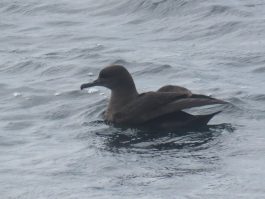 “Knowing five were seen today inland at Bantam Lake, I played a hunch that one or more might fly down river as storm passed,” Frank wrote on eBird.