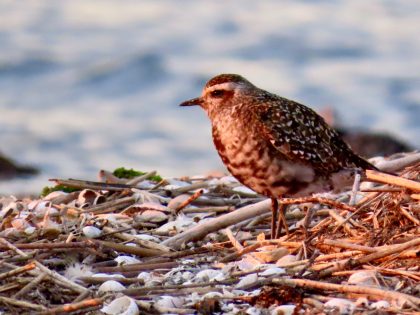 Edited and updated from a version published in September 2014


American Golden-Plovers get their name from the golden hue of their speckled back feathers. Right now, the birds are molting into their non-breeding (alternate) plumage, so their bold, black throat and belly feathers are interspersed with more brown feathers, making for a more barred appearance.

The bird in the video, above, is in fall plumage (Gilles Carter shot the video). The photograph is of an American Golden Plover found at Milford Point last week. The differences in the plumage are evident.

Knowing their silhouette is an important identifier, as shorebirds are often at a distance and can be backlit by the sun. American Golden-Plovers have a stocky appearance, with fairly long black legs for a plover, a large and rounded head, short neck and short black bill with which they forage for insects and other invertebrates.

One or two birds show up at the usual locations in Connecticut in August, September, and October — the Milford Point Coastal Center; Rocky Hill Meadows; and Sandy Point, in West Haven among them. Check eBird.

Not all shorebirds live at the shore and this is one of a few plovers that spend most of its time in meadows and mudflats, rather than the shore itself. Keep your eyes out for these birds in pastures and fields — eBird shows a number of sightings over the last decade along the Connecticut River — but note that they are only seen in Connecticut during migration, as they nest in the Arctic tundra and spend their non-breeding season in Central and South America.

American Golden Plovers are relative rarities here but if you go looking and don’t see one, you’ll see other birds — this is a terrific time of year for shorebirds. Look for Buff-breasted Sandpipers, Red Knots, Least and Semipalmated Sandpipers, and White-rumped Sandpiper, among others.

Listed as Least Concern by the IUCN, but like most shorebirds, American Golden Plovers are vulnerable to habitat loss and degradation. Like many other shorebirds, golden plovers were exceedingly abundant into the 19th century. A flight of “millions” was observed near New Orleans in the first half of the 1800s; 48,000 of those were shot and killed by market hunters. The Migratory Bird Treaty Act of 1918 helped save it from extinction. Birdsoftheworld.org estimates that the total American Golden Plover population now might be 500,000.