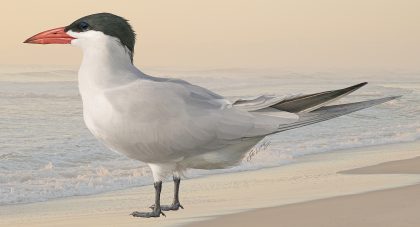 Edited from a version written by Frank Gallo in 2014.

Although uncommon, Caspian Terns may be found in coastal Connecticut from mid-April to early November.

Caspian Terns are our largest terns, and are similar in size to Ring-billed Gulls or Royal Terns, but bulkier. Their wide wings and slow steady wing beats make them appear gull-like in flight. They are rather blocky-headed, and have a large black-tipped red bill, a pale gray mantle, black-tipped wings, a white shallowly forked tail, and are white below, with long black legs.

Unlike the similar, more slender, Royal Tern, which shows a white forehead, except briefly during the breeding season, and has just a black trailing edge to the under-wingtip, Caspian Terns retain a black cap in all seasons (although the forehead looks speckled in winter), and show obvious broad black under-wingtips in flight.

Basically, if you’re seeing a large, red-billed tern that flies like a gull and has a hoarse voice, you’re probably looking at a Caspian Tern.

They are found on every continent except Antarctica. In North America, they are rather localized breeders on both coasts and the Gulf of Mexico, and along the Great Lakes, and scattered locations along rivers and lakes throughout the interior United States and the prairie provinces of central Canada.

They winter along the southern portion of both coasts, the Gulf of Mexico, and through Mexico to northern South America.

In fall, adult Caspian Terns often travel with the young-of-the-year. They are most often encountered along the coast at places such as the Coastal Center at Milford Point, Sandy Point in West Haven, and Hammonasset Beach State Park and nearby sites in Madison. 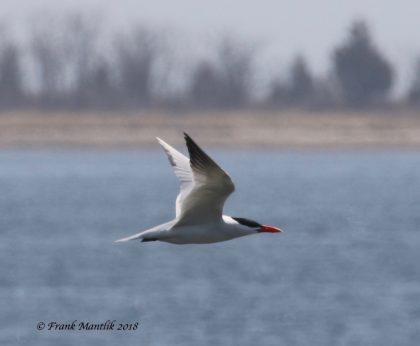 To view the sandbars at Milford Point, come at or near high tide and walk to the observation platform overlooking Long Island Sound. Walking west from the platform for 50 yards to the bend gives a lower but closer look at the bars and the mouth of the river.

At Sandy Point, walk out to either the inner or outer bar and scan the rocks, jetty, and sandbars.

At Hammonasset, park at the Meig’s Point parking lot and either scan Long Island Sound from the overlook, or walk out the moraine trail to scan the rocks and jetty off the end. Also check the coast off the west-end pavilion.

As we’ve said before in the Daily Bird: this is a great time of year to look for birds at the shore. Check the sandbars, jetties, beaches, and rock outcrops at different tides. Changing tides cause the birds to move from place to place. Caspian Terns are uncommon, so finding one may require multiple visits to appropriate habitat combined with a little bit of luck.