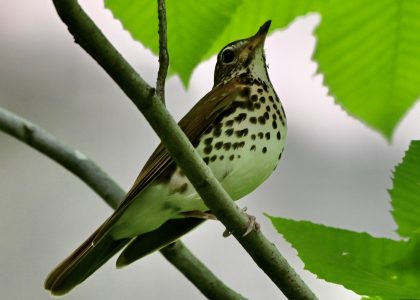 Listen for Wood Thrushes throughout the Chaney Preserve in spring and summer. Photo by Gilles Carter.

September 3, 2020 — Thirty-three acres of prime oak forest has been added to Connecticut Audubon’s 233-acre Morgan R. Chaney Sanctuary in Montville, increasing the amount of habitat protected by the preserve by almost 15 percent.

The 33 acres were donated to Connecticut Audubon by Walter N. Wainwright, Jr., of Waterford.

Connecticut Audubon now conserves about 3,300 acres in all areas of the state. Like almost all of the organization’s 20 preserves, the Chaney sanctuary has hiking trails and is open to the public. Connecticut Audubon is considering whether trail linkages are appropriate for the new 33-acre section.

“This is a terrific addition to an important sanctuary in southeastern Connecticut,” said Patrick Comins, Connecticut Audubon’s executive director. “The sanctuary was already important for birds, and has long been a great place to hike. This donation makes it even better, enlarging and enhancing its ecosystem and recreational values. We send our thanks to Walter Wainwright.”

The donation helps protect an important intact forest. Because the number of bird species in a forest drops as the forest gets smaller, adding to and providing buffers for existing protected lands helps ensure that species diversity remains stable.

In Connecticut, mature forests are home to Scarlet Tanager, Ovenbird, Great-crested Flycatcher, Hooded Warbler, Red-eyed Vireo, and other species. Connecticut Audubon has also created and is managing a 10-acre section of scrub-shrub habitat at the Chaney preserve, to provide nesting areas for species such as Chestnut-sided Warbler, Eastern Towhee, and Blue-winged Warbler, the populations of which are falling. 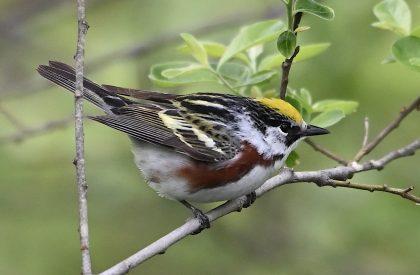 A 10-acre section of the preserve is being managed to attract shrub-nesting birds such as Chestnut-sided Warblers. Photo by Gilles Carter.

The new section slopes toward and helps protect a large swamp in the Thames River watershed, and so it helps protect water quality in the river and in Long Island Sound.

The Morgan R. Chaney Sanctuary is managed by the conservation staff at Connecticut Audubon’s Center at Pomfret, and is also an easy drive from the Roger Tory Peterson Estuary Center in Old Lyme, as well as from New London, Groton, Norwich and elsewhere in southeastern Connecticut.

Visitors are welcome. The trail entrance is on Turner Road and is marked by a Connecticut Audubon sign. Read more about the Chaney Preserve and our other sanctuaries on our sanctuary page.