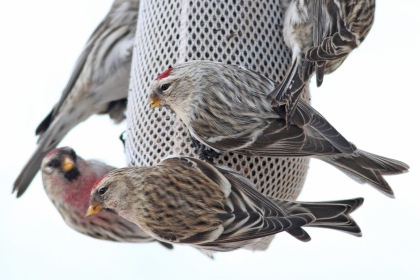 These redpolls are eating thistle from a sock feeder. The bird in the middle is a Hoary Redpoll, the others are Commons. Photo by Nick Bonomo.

November 4, 2020 — For those of you who need a distraction this morning, here’s the fifth of our six winter finches. Edited from a version written in January 2015

by Nick Bonomo
Common Redpolls are “irruptive” fall and winter visitors to Connecticut. That is, they occur only when their food supply to the north is depleted. This species breeds in the Arctic tundra and northern boreal forests. Redpolls are absent from Connecticut during most winters, but over the past few weeks of 2020 they have appeared in small numbers throughout the state, along with other winter finches: Pine Siskin, Purple Finch, Red-breasted Nuthatch, and Evening Grosbeak.


The Common Redpoll is a small brown-and-white finch with a red forehead patch. Its small, conical yellow bill is bordered by black, especially on the chin. Its back is brown with white wing bars, while the underparts are white with dark streaking. The brightest males can have rosy red breasts, while females lack red on their breasts altogether.

Most Common Redpolls are seen eating seed from bird feeders, sometimes in the company of the similarly-sized Pine Siskin, American Goldfinch, and Purple Finch. They can occur as singles or, if you are lucky, in noisy flocks of up to several dozen individuals. When away from bird feeders, redpolls are often seen eating wild seeds in weedy fields or trees and may perch rather high in treetops while not feeding. Listen for their short and harsh “chit-chit” calls. When in flocks of dozens this chattering can be heard nonstop. Redpolls can occur anywhere throughout the state, both inland and coastally, but they are most often seen in the hills of Litchfield County. 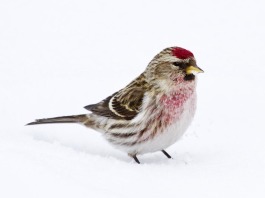 If you are lucky enough to encounter a flock of Common Redpolls and you notice a particularly pale one among the group, it may be the super-rare Hoary Redpoll. Hoary Redpolls, which breed even further north, occasionally wander this far south with Common Redpolls. Separating these two species is very tricky, however, and some taxonomists argue that they are in fact different populations of the same species.
Common Redpoll is a species of “Least Concern,” and their large population appears to be stable at this time.
Contact Us
Privacy Policy       Financial Information       Photo Credits       Donate Your Car