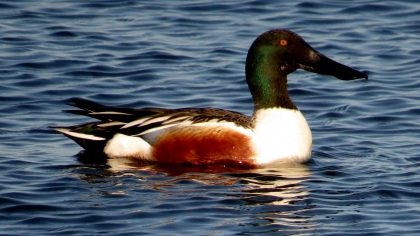 Edited and revised from a version published in 2017.

by Milan Bull
Senior Director of Science and Conservation
One of the most distinctive of our dabbling ducks, small numbers of Northern Shovelers are most frequently seen in our area in late winter and early spring, but several have been around recently, including at 14-acre Pond in Norwalk, Jones Pond in Litchfield and the Milford Point Coastal Center. Gilles Carter took the video above taken at Wooster Park I Strtatford last winter.

Their populations have been healthy since the 1960s, most likely because of favorable breeding, migration, and wintering habitat conditions. Breeding mostly in the west, from Alaska down through the prairies, and wintering along the southern coast from California through Texas and Mexico, only small numbers winter up the east coast from Florida through Long Island.

What it looks like: A medium-sized dabbling duck, just a tad smaller than a Mallard, Northern Shovelers are characterized by a very long, spatula shaped bill which they use to strain the water for food. The male superficially resembles a Mallard with its glossy green head, but the white chest and chestnut flanks stand out in the field. The female resembles a small female Mallard with an oversized bill. 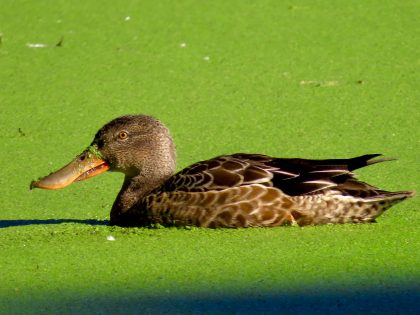 A young drake Northern Shoveler, photographed on the duckweed-covered pond at Birdcraft by Patrick Comins.

Look for small flocks of dabbling ducks and scan for ducks with dark heads and white breasts. Often seen in company with Green-winged Teal.
Northern Shovelers, unlike Mallards, are monogamous and remain together for long periods of time. When flushed off the nest, the female often defecates on its eggs, apparently an effort to deter predators.
Contact Us
Privacy Policy       Financial Information       Photo Credits       Donate Your Car