Connecticut Audubon’s Birds of the Year for 2020

December 21, 2020 — Birding and bird conservation is a lot more fun when you can share your stories. When a rare bird arrives, people spread the news. When a bird needs help, it becomes a rescue tale to be recounted. When something as simple as groups of beautiful birds show up at feeders, feeder-watchers can’t wait to let you know about it.

For our 2020 Birds of the Year, we have the usual array of interesting rarities. But we also have great stories to make the list come alive.

Yellow Rail at Milford Point from Gilles Carter on Vimeo.

Yellow Rail — Imagine our astonishment when a neighbor delivered a cardboard box to the Coastal Center at Milford Point in October and inside was a Yellow Rail. It’s a bird that is legendarily hard to see, even when you know it’s there. This one was scooped up from a lawn, stunned perhaps from a collision with a window.

Louise Crocco and Stefan Martin, who work at the Coastal Center, opened the box, not being sure what was inside. The rail bolted and took cover under the outdoor stairs for a couple of hours. Word got out almost as quickly as the bird. The rail eventually made its way to the marsh, watched over at a respectful distance by an honor guard of amazed camera-wielding birders. 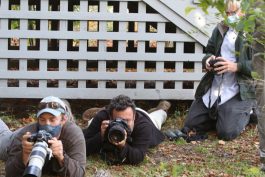 Photographers laying out to get a good shot of the Yellow Rail. © Frank Mantlik

“Winter Finches” — Red-breasted Nuthatches poured down from the northern forests in big numbers in late summer, followed in fall by Purple Finches and Pine Siskins, a few Common Redpolls and Red Crossbills, and a smattering of big, beautiful Evening Grosbeaks.

It’s been years since so many individuals of so many species spread through so wide an area Connecticut.

“I saw two males and four females at my backyard feeders in Uncasville, CT,” Jenna Bartholomew told us, referring to Evening Grosbeaks. “They were at a platform feeder with black oil sunflower seeds. Amazing to see! I’ve never seen them before, but my mom said the last time she’d seen them was over 10 years ago in New London.”

December seems to be quiet for winter finches but Connecticut Audubon Executive Director Patrick Comins said there’s reason to keep looking: “We often get an early wave that passes through and then a second wave as birds from Northern New England are slowly pushed down.” 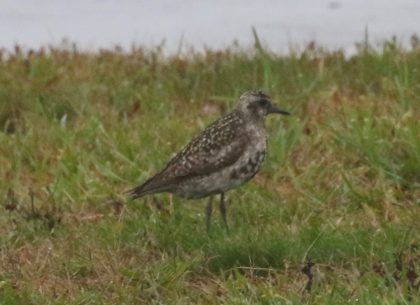 From a distance, Frank Mantlik took this photograph of the first Pacific Golden-Plover recorded it Connecticut, at Sikorsky Airport, Stratford. © Frank Mantlik

Firsts for the State: Townsend’s Warbler, Pacific Golden-Plover — Townsend’s Warbler is a bird that Connecticut’s serious birders had been waiting for. A West Coast species, it had been seen in all the states surrounding Connecticut. So it seemed as if its arrival here was just a matter of time.

That time came in April. Paul Desjardins found a Townsend’s Warbler in the tree canopy of Hartford’s Cedar Hill Cemetery — the first of the species ever recorded in Connecticut. Cedar Hill was a busy place for a few days, as birders gathered to add the Townsend’s to their state lists.

The wait for the second state record was shorter. Amazingly, another Townsend’s Warbler showed up in Fort Hale Park, New Haven, in October.

Also in October, Frank Mantlik was birding in Stratford on a day of miserable weather. He put his scope on what looked like an American Golden-Plover and posted the sighting on the Connecticut Ornithological Association’s listserve. .But, he noted, “Can’t rule out the plover as Pacific Golden.”

That was at 3:59 p.m. Pavlov’s dog would not have responded any faster. Nick Bonomo showed up. Julian Hough (“best shorebird person in CT, international chops,” Greg Hanisek has said of him) weighed in, as did Hanisek. (Julian is also a designer and photographer for our Connecticut State of the Birds report.)

Here’s what Frank, a member of the regional board of the Coastal Center at Milford Point, posted on the listserve:

“Many know that I love storm-birding. I learned long ago that bad weather brings ‘good’ birds. So I drove into the airport once again to check for any birds of note. From the small ‘observer’s lot’ along the chain link fence a short way past the terminal building, I saw an adult Golden-Plover. I suspected it was an American Golden-Plover, though very late for that age at this latitude…. I quickly began attempting photos, despite the miserable rainy/windy conditions. I alerted colleagues, and sent a back-of-camera image to them. Almost instantly, Julian Hough, Doug Gochfeld, and Nick Bonomo suggested it looked more like a Pacific Golden-Plover. I had to leave on an important errand, but returned before 5pm to a small, wet mob of birders studying the bird in their scopes.” 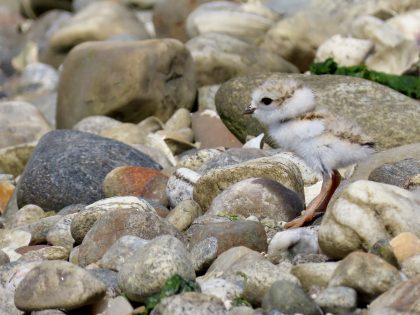 Baby Piping Plovers survived at Milford Point because adult birds moved the eggs out of the path of the rising tide. Photo by Patrick Comins.

Incidentally, the Townsend’s Warbler was the 400th species Frank had seen in Connecticut. Number 401 was the Pacific Golden-Plover.

Piping Plover, American Oystercatcher — Rare birds provide a thrill. But chasing rarities is a pastime that’s difference from bird conservation. A fair amount of the difficult bird conservation work in Connecticut is accomplished by the Audubon Alliance for Coastal Waterbirds. Yet even the Alliance was amazed by what happened at Milford Point in July.

With unusually high tides approaching, Piping Plovers tending two nests on the sandbar painstakingly rolled their eggs to slightly higher ground, just enough to keep the water from washing them away. Nearby, an American Oystercatcher, sensing the same danger, sat on her eggs to keep them safe.

Laura Saucier, a wildlife biologist with the state Department of Energy and Environmental Protection and a Piping Plover expert, said that moving eggs out of the way of the tides is not unheard of but is rare nonetheless.

“I’m not sure if it is a common behavior across all shorebirds,” she said, “but I suppose if you evolve to nest in dicey/dynamic places you have to roll with punches (or tides!).”

A couple of weeks later, one of the oystercatchers that hatched from the eggs the mother oystercatcher protected became entangled in monofilament. A team from the Alliance and Connecticut Audubon — Beth Amendola, Katerina Gillis, Stefan Martin, and Patrick Comins — worked to capture it carefully then free it from the mesh. They also put an identification band on its leg. We’ll be watching in a few years to see if the survivor of the flood and the monofilament returns to the area. 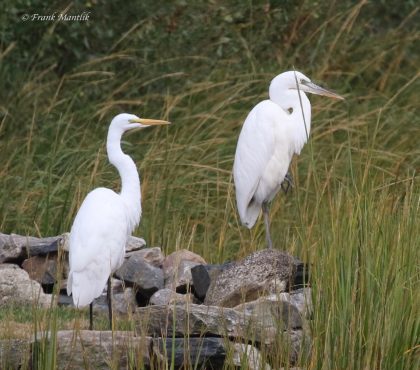 The white subspecies of the Great Blue Heron (right) helpfully perched next to a Great Egret at Brothers Brook Cove on the Mianus River. © Frank Mantlik.

The best of the CTAudubon RBA
Almost 1,800 people have signed up for Connecticut Audubon’s Rare Bird Alert. They received about 25 alerts in 2020. Here are some of the best:

A Thick-billed Murre was spotted in Long Island Sound in Stonington on January 25 and in Greenwich, 100 or so miles to the west, on January 26.

A Harris’s Sparrow, a bird that nests in northern Canada and winters mostly on the Great Plains, visited Hammonasset Beach State Park in February.

Birders found a Red-necked Phalarope at the Quinebaug Fish Hatchery in Plainfield in early September and at Hammonasset later in the month.

A Bell’s Vireo, a bird of the midwest and southwest, stopped by Silver Sands State Park in Milford in October.

A bird of a different color — Everyone in Connecticut who is interested in birds has seen a Great Blue Heron. But the “Great White Heron,” not so much. The Great White is a subspecies from coastal southern Florida. One arrived in the Cos Cob section of Greenwich in late September. It was a life bird for nobody but a treat for people who love birds and the beauty and surprise that comes with them.

Harris Sparrow at Hammo from Gilles Carter on Vimeo.