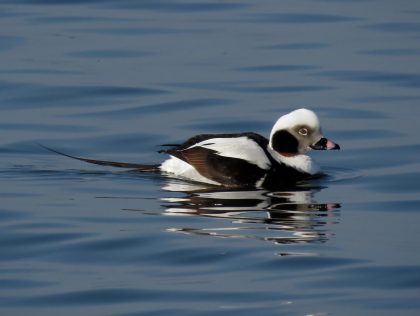 December 2, 2020 — It’s a great time of year to bundle up and head to the shore to look for sea ducks. The eBird maps below show where Long-tailed Ducks have been reported since the start of November, in the western half and eastern half of Long Island Sound.

Edited from a version published in December 2013

How to find it: Long-tailed Ducks are uncommon but regular visitors to Connecticut waters. Look for a low flying duck, usually as a single bird or pairs (sometimes small groups).

My first impression of this bird is that it is pointed on all four corners, and flies with a very rapid, stiff winged appearance (short wing beats). If you want to see the “mother lode” of Long-tails, visit Nantucket with Connecticut Audubon Society EcoTravel for the migration of 250,000 birds, seen each evening as they come in from the sea during winter months. Spectacular! 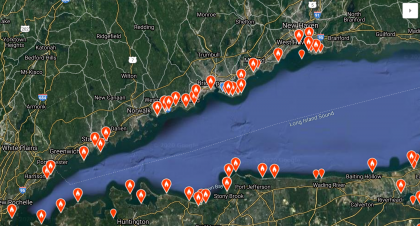 What it looks like: Plumages are variable but most colorful in the winter months when males are a lovely patterning of white, gray, black, and chestnut. Males have distinctive long central tail feathers that extend well beyond the wing tips of a resting bird. Most ducks molt twice a year, but Long-tailed Duck has a nearly continuous molt with three different plumages and of course all the intermediate versions.

Long-tailed Ducks can be found in areas where other wintering sea ducks are found, so one should be keeping an eye out for all three scoter species, Common Goldeneye, Red-breasted Merganser, and Common Eider.

Conservation status: This is a diving duck that primarily eats crustaceans, plant material, and mollusks. Though typically found in shallower waters, this bird can dive up to 200 feet. Water quality is clearly a concern both on its wintering grounds here in Connecticut and its nesting area in ponds of the Arctic. Because of the difficulty of census work for this species, data is limited, but populations seem to be declining.

Long-tailed Duck is listed as “vulnerable” by the IUCN, which means it is likely to become endangered unless its conditions improve. Unfortunately, because this species is a diving duck, it has often fallen victim to fishing nets and was lost by the thousands back in the 1950’s, primarily in the Great Lakes region.