State of the Birds 2020: Recommendations and Actions 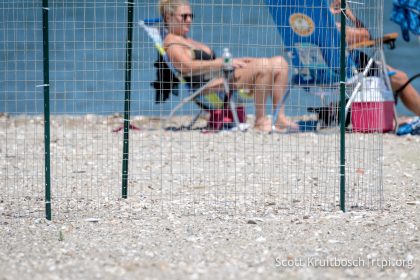 Beachgoers, please heed the polite requests of shorebird monitors to keep your distance. Even when Piping Plovers were protected by exclosures, people crowded around. Photo by Scott Kruitbosch.

Connecticut’s community of birders and conservationists, law enforcement officials, elected officials, and the general public have demonstrated a commitment to the state’s birds and other wildlife over the years. Unfortunately, the COVID-19 pandemic has made it harder to carry out that commitment.

Improving conditions for Connecticut’s birds and other wildlife will require work and cooperation. Here are the Recommendations for how to achieve that, from the 2020 Connecticut State of the Birds report.

Coastal Birds
If it’s safe for small groups of people to work together outside in 2021, the Audubon Alliance for Coastal Waterbirds will be back at full strength. But even if that’s the case, 2020 showed that when it comes to protecting threatened coastal birds there’s a need for greater cooperation from people who aren’t engaged directly in conservation.

Local birders and photographers could be more mindful of being good stewards. With more people spending their off time on the beaches in 2020, nesting birds were too often chased or pursued by cameras, binoculars, and smartphones. Beachgoers, please heed the polite requests of shorebird monitors to keep your distance. And please obey local ordinances that prohibit dogs from many of the nesting areas in the nesting season.

Better yet, volunteer for the Alliance. You’ll get a greater understanding of conservation; you’ll help educate others on how to reduce a source of stress on the birds; you’ll make a positive contribution to the well-being of the threatened species.

Local, state, and federal law enforcement should ensure that officers learn the applicable environmental laws and regulations, and enforce them. These include laws restricting dogs and ATVs, and laws about harassing or harming protected species. 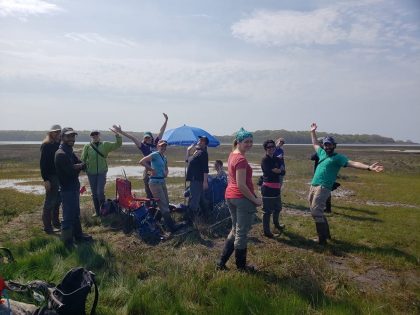 Volunteer. You’ll get a greater understanding of conservation; you’ll help educate others on how to reduce a source of stress on the birds; you’ll make a positive contribution to the well-being of the threatened species. Photo courtesy of Alison Kocek.

The Connecticut Bird Atlas
Winter field work for the atlas began November 1 and will continue through February, so there’s still time to volunteer for this important project. Winter protocols are different from summer. Observers simply count the number of birds of each species they see, and break down their surveys into separate one-hour checklists, ideally from different sites within a block. There’s more at ctbirdatlas.org.

Habitat
Land acquisition remains the best way to protect habitat. Governor Lamont and the Connecticut General Assembly must restore, fully fund, and protect the Community Investment Act as a source of open space funding. Similarly, we call on state officials to increase funding for the Open Space and Watershed Land Acquisition Grant Program, and the Recreation and Natural Heritage Trust Program.

This bill, introduced in Congress for each of the last several years, would direct some $1.3 billion of existing revenue annually to state-led wildlife conservation efforts, allowing states like Connecticut to more fully implement their Congressionally mandated Wildlife Action Plans. The funding would come from a small portion of the royalties that energy companies pay the federal government to drill and mine on publicly owned lands and waters. Connecticut would receive about $12.6 million annually from the fund—an almost 10-fold increase in what it spends on the plan now. Connecticut’s wildlife would benefit proportionally.