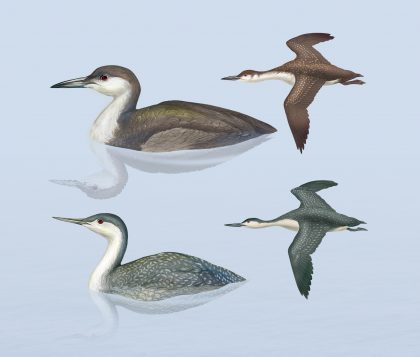 The two loons you’ll see most often in Long Island Sound are the Common Loon, top, and, for comparison, the Red-throated Loon, bottom. These illustrations were provided by CTAudubon Board Member Patrick Lynch and are from his book “A Field Guide to North Atlantic Wildlife” (with Noble S. Proctor).

Tonight at 7: “The Ordeal of Bird Migration” with Mariamar Gutierrez. Only $8 for members. Click for tix.

by Michael Aurelia
Common Loons may be the symbol of wild, northern lakes but in winter and spring these large diving birds are relatively easy to find in Connecticut’s coastal waters and larger freshwater lakes and rivers. It is the largest loon you are likely to see in Connecticut.

The Common Loon is a large bird with black, white and gray colors. The breeding adult has a black head, neck, wings, sides, and bill, with vertical white strips in a collar on the neck. Its back is a black and white checkerboard pattern. Although the male and female look similar, the male is up to 26 percent larger and up to 32 inches long. Immature birds have more gray with some white on the neck.

Check off Stratford Point, at the mouth of the Housatonic River; the Cove Island Bird Sanctuary in Stamford; at the mouth of the Oyster River in New Haven; at Stonington Point, and at four state parks: Silver Sands, Harkness Memorial, Rocky Neck, and Hammonasset Beach.

Don’t forget that you can find the nearest Common Loon by going to eBird.org (click Explore and then species maps and insert “Common Loon.” For species date, choose year round current year; for location, choose Connecticut; orange pins are the most recent). 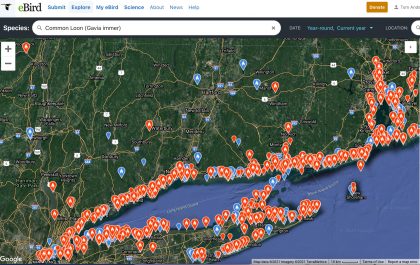 Loons are rarely observed on land. Breeding habitat includes lakes larger than 59 acres with clear water, abundant fish, numerous islands and a relatively undeveloped shoreline. Loons were not documented to have bred in Connecticut until recently when a pair was observed with young in Norfolk.

Conservation Status The Common Loon is one of the most studied large diving birds. According to Cornell’s “The Birds of the World Online,” Common Loon populations were reduced by hunting before the passage of the Federal Migratory Bird Treaty Act. Because the Common Loon is long lived with delayed maturity and low fecundity, it is subject to threats of pollution and breeding habitat loss as lake shorelines are developed. Many were affected by acid rain. Mercury, lead and other contaminants are often found in the Common Loon because of its position at the top of the food chain.

It is listed as a species of concern in Connecticut but of “least concern” by the IUCN.

Michael Aurelia is a former member of the Connecticut Audubon Board of Directors.