by Andy Rzeznikiewicz, preserve manager at our Center at Pomfret and Trail Wood Sanctuary
February 3, 2021 — This is the rare passerine, or songbird, that actually preys on rodents and other birds. It and its close relative the Loggerhead Shrike are the only two in North America to do that.

Northern Shrike is a medium-sized songbird with a pale gray back, whitish breast, black mask, rounded forehead, and a hawk-like hooked bill.

At first glance some birders may gloss over a shrike thinking it’s just a mockingbird, particularly since they are often found in similar habitat in winter. A couple of quick references to rule out mockingbird are the black mask, the flight differences, and the general lack of other birds around when a shrike is present.

The shrike has a fast, quick flight; the mockingbird has a slower flight often showing its white outer tail feathers.

Northern Shrikes nest in northern Canada. Some migrate to Connecticut in years when their food supply is low. There haven’t been many shrikes observed here for a while — an eBird map for the past several winter shows only scattered pins. There’s winter, birders found one at the Woodbury-Southbury Rod and Gun Club Farm, and another in Union. And a resident of Farmington sent us a photo of an injured Northern Shrike that died of its injuries soon after the photo was taken.

The best places to look are any conservation area in Connecticut with hedgerows and semi-open fields. 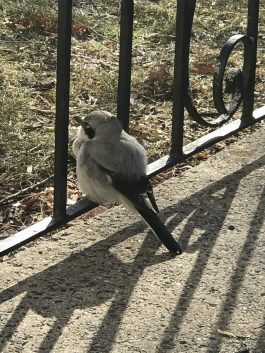 An injured Northern Shrike in Farmington in mid-January. The bird died of its injuries soon after the photo was taken. Courtesy of Reada Melone.

At the Pomfret Center, check the tops of the scattered shrubs, trees, and fencing. They often perch there to scan for rodents and small birds. The hedgerows at the Pomfret Center’s parking lot and across the street from the center, and the shrubby thickets in back, are all likely spots to see one.

The Duck Marsh Preserve is a half mile north of the Pomfret Center along the east side of Wrights Crossing Road. Brushy scattered fields and an extensive marsh with dead trees are a good location to find perching shrikes.

Conservation Status: Northern Shrike is considered of least concern. Large areas of their breeding habitat in Canada have been protected.

This week’s Connecticut Audubon Society Bird Finder was written by Andy Rzeznikiewicz, preserve manager at our Center at Pomfret and Trail Wood Sanctuary, and edited by Tom Andersen.