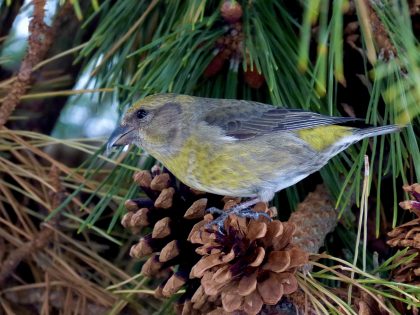 Birders are getting good views and good photos of a small flock of Red Crossbills at Hammonasset Beach State Park in Madison, in pines to the right of the Meigs Point pavilion. We posted this Daily Bird just a few months ago, in November (it was originally written several years ago), but Hammo has been such a reliable location lately for these rarities that it’s worth posting again (with new photos by Patrick Comins). — Tom Andersen

by Paul Cianfaglione
The Red Crossbill is a common resident of higher-altitude coniferous forests of northern New England, but is nomadic, irruptive, and unpredictable in Connecticut. They can wander extensively, especially during years when cone crops fail within its normal winter range. During irruption years, movements may begin as early as late September, and may coincide with exodus of Red-breasted Nuthatch. 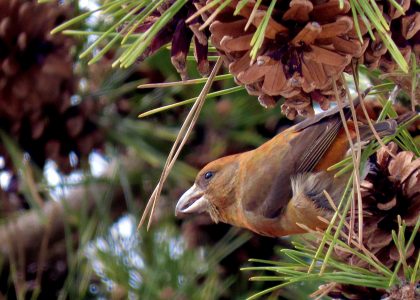 Red Crossbills use their cross bills to extract seeds from pine cones. Photo by Patrick Comins.