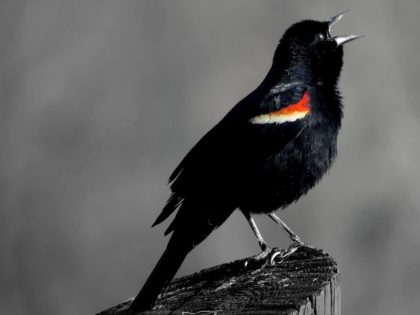 Revised from a version published in February 2016

by Greg Hanisek, editor of The Connecticut Warbler
Among the first noticeable signs of spring in February is the progression of blackbird flocks, often large or even huge.

They will consist of a mix of Common Grackles, Red-winged Blackbirds and Brown-headed Cowbirds. Any of the three can be the primary species in a given flock, although flocks dominated by cowbirds tend not to have a lot of grackles.

Rusty Blackbirds will occasionally turn up in these flocks, but they prefer wooded or shrubby swamps to open fields. You’re more likely to find them on their own in small flocks, especially now that (unlike the abundant trio) they’re in steep decline. And alhtough there have nee none in 2021, it’s always worth keeping an eye out for Yellow-headed Blackbirds.

Where To Find Them: Their arrival corresponds in part to immediate weather conditions, so a solidly frozen landscape will delay their appearance. It’s also worth noting that birds equipped to arrive before the end of February are also capable of wintering. In any given winter a few mixed blackbird roosts may be scattered around the state, but once the spring flocks start their march they quickly become an overwhelming presence.

Flocks will appear first along the coast and up the major river valleys, before spreading out to any and all open habitats. Corn stubble fields are especially attractive, and the birds will often rest in tall deciduous trees near fields in which they feed.

How To Find Them: There’s nothing tricky. A flock of several thousand dark birds, all smaller than crows, are hard to miss in an open area. They’re usually very noisy though, so you may be alerted to their presence by a dull din if they’re at a bit of distance or blocked by trees or other landscape features. 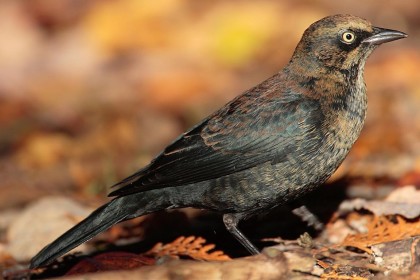 These flocks are worth studying, because non-adult male Red-winged Blackbirds and Brown-headed Cowbirds trip up many observers. There’s nothing like seeing a lot of them together in all plumages to help get a handle on them.

Noteworthy: One reason birders take the time to sort through these common species is the chance to find a Yellow-headed Blackbird.

The spectacular adult males are easy to identify but disappear among a dense flock of other blackbirds. Patience is required as they move about. Female and immature Yellow-headeds are less obvious, so it pays to familiarize yourself with the more subtle yellow patterns they present.

As a cautionary note, also check the degree and extent of orange/yellow tones that can be shown by female Red-wingeds, as well as their bold supercilliums and underpart markings.