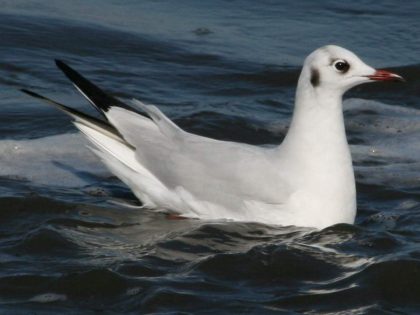 by Milan Bull, Senior Director of Science and Conservation
March 17, 2021 — A great find at any time of the year, but more likely in the late winter and early spring, this small, hooded gull is normally found associating with large flocks of Bonaparte’s Gulls but often consorts with larger gull species such as Laughing and Ring-billed Gulls.

In Europe, these gulls are commonly seen scavenging in parks and other public areas, something they never do here in North America.

Where to find it: Birders found a Black-headed Gull this week at Captain’s Cove in Bridgeport, and there was one last year at the Birdseye Boat Ramp in Stratford.

What it looks like: The Black-headed Gull is a small gull, much smaller than the Laughing Gull, with a distinct white triangle on the leading edge of its wings and dark under the tips of the wings. Look for a dark spot behind the eyes and noticeable red beak and legs.

Unlike other hooded gulls in breeding plumage, such as Laughing Gull, the Black-headed Gull does not have a black hood, but rather a dark brown hood, readily seen in good light.

However, the birds in Connecticut now are in winter plumage, and therefore lack the distinctive brown hood.

Conservation status: Black-headed Gulls are an abundant species in Europe and increasing their range. In North America (primarily Southern Greenland) there are about 400 breeding pairs.