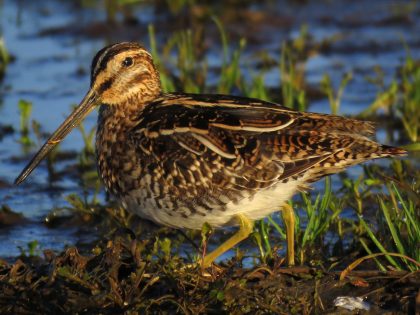 March 9, 2021
Wilson’s Snipe
Gallinago delcataby Christopher S. Wood
Wilson’s Snipe are starting to show up in Connecticut. These game birds are cryptically and physically similar to American Woodcock but they are readily distinguishable by a head-striping pattern opposite that of Woodcock: longitudinal rather than latitudinal.

More helpfully for ID purposes, the snipe prefers muddy edges of streams and ponds rather than forest openings as used by woodcock.

As they probe in the mud they can sense prey with the tip of their bill (or “snout,” which became “snite,” which became “snipe”). With eyes set so far back, they can see behind them while the bill is buried in the mud. That’s why our view of them is usually of a fleeting zigzag of a stripy brown bird: they see us coming long before we see them. But even that view is a rewarding one to birders.

When flushed,  Snipe zigzag horizontally with raspy “skaip” alarm calls (woodcock tend to zigzag straight up through branches). Look also for the whitish belly of the snipe, compared to the rufous underside of the woodcock.

A good tip from Cornell Lab of Ornithology’s Birds of the World is that “In spring, [Wilson’s Snipe] migrates primarily on southerly winds after warm fronts, in fall mostly after cold fronts. Migrates on moonlit nights.” 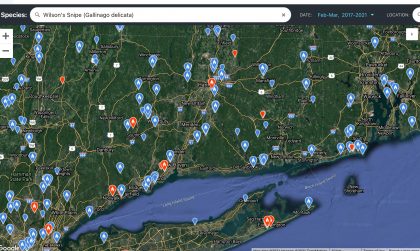 This eBird map shows observations of Wilson’s Snipe over the past five years in February and March. Red pins are within the last month.

Where to look
The former Nyala Farm site, now corporate office complex: In Westport on Greens Farms Road just off the Sherwood Island Connector, a wet swale running through a regularly mowed field is an annual stopover in Spring. Scope the grass clumps and water edges near the antique well cover, but only from Greens Farms Road: straying into the field (from personal experience) draws immediate response from site security.

Horsebarn Hill at the UConn Storrs campus: Well covered by local birders, Horsebarn Hill records good numbers of Wilson’s Snipe in spring and fall migrations. The birds can be seen from several vantage points on Horsebarn Hill Road that circles the hill.

Although it nests occasionally as nearby as western Massachusetts, there are no recent breeding records in Connecticut; northern New England is essentially the southern edge of its breeding range. Because they do not nest in Connecticut, Wilson’s Snipe cannot be located by watching and listening for lekking displays, as we do with woodcock.

Until recently, Wilson’s Snipe were considered a subspecies of the Common Snipe, which ranges over northern Europe and northern Asia. Common Snipe are occasionally found on the western islands of Alaska.

Conservation status: Like many wetland-dependent species, loss of wetlands habitat has historically affected populations, as has excessive hunting. The continuing loss of maintained farmlands along migration routes, including in Connecticut, could likely affect this species, and consequently opportunities for observation in our state. While it is still hunted, there does not appear to be a consensus on the effect of hunting on populations; however, the species is not currently considered threatened or endangered.

Chris Wood has been an active birder in Connecticut for over 40 years and served as chair of the 1981-1985 Connecticut Breeding Bird Atlas Project. He has been on the Connecticut Ornithological Association’s Board of Directors and its Avian Records Committee and he is a current COA, Connecticut Audubon, and Western Connecticut Bird Club member. Chris lives in Woodbury.
Contact Us
Privacy Policy       Financial Information       Photo Credits       Donate Your Car