Despite the pandemic, 200-plus volunteers documented a thriving Osprey population in 2020 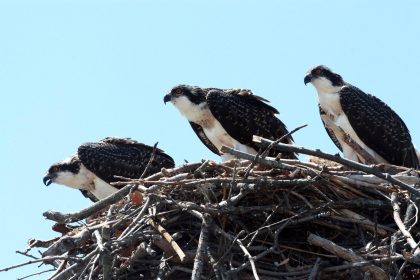 Photo by Brendan Murtha, principal author of the Osprey Nation report for 2020.

News Release
March 8, 2021 — More than 200 volunteers overcame arduous circumstances caused by the Covid-19 pandemic to document 510 active Osprey nests in 2020, the most since Connecticut Audubon’s Osprey Nation project began in 2014.

The volunteers’ work, and the continued revival of the Osprey population from near extinction 50 years ago, is detailed in “Osprey Nation Report for the 2020 Season,” which Connecticut Audubon released today.

“By all indications, the Osprey population in Connecticut is doing very well,” the report concludes. “A population recovery that stands as one of the greatest conservation success stories of recent decades continues.”

Ospreys are making their way north for the nesting season now. Connecticut Audubon has hired a new coordinator for Osprey Nation’s eighth season and will soon be recruiting volunteers to continue to help track the revival of these birds of prey.

Indicators or environmental health
Because Ospreys eat only fish, they are excellent indicators of the health of Long Island Sound and its bays, and of the state’s rivers and lakes. If Osprey populations or productivity fall over a sustained number of years, it might indicate that water quality has gotten worse, that fish are no longer abundant or other potential problems.

“One of Osprey Nation’s goals is to serve as an early warning system,” said Patrick Comins, Connecticut Audubon’s executive director. “The project is documenting population trends that would signal to ecologists and officials that fish populations are relatively healthy or that contaminants are harming the fish and the birds.”

The hope is to avoid repeating the catastrophe of the mid-20th century. The pesticide DDT, which was sprayed in salt marshes and elsewhere to kill mosquitoes, ended up in water bodies and eventually in the fish that Ospreys ate (and in Bald Eagles, Peregrine Falcons, and Brown Pelicans as well).

Compounds in the DDT caused the birds to lay eggs with shells that were too thin and fragile to withstand incubation. DDT was banned in 1972 and the birds eventually recovered.

A difficult year
Last year was a difficult one for the Osprey Nation project. As the report notes, “Unforeseen circumstances led to the departure of our first 2020 coordinator.

In the month that followed, reporting progress ground to a halt. Early weeks of data entry and organization, the basis of the project’s success, were lost entirely.”

Some volunteer stewards dropped out mid-season, but a new coordinator and a volunteer who helped with data entry, and the continued dedication of the stewards who remained, salvaged the season.

In all, 231 volunteers collected and mapped data on 510 active nests in the state.

The report, written by Brendan Murtha, who took over as 2020 Osprey Nation coordinator in June, concludes: “The stewards persevered through unprecedented times and were able to salvage so much important data from near-ruin: in a year of few bright spots, this at least can bring us joy.”

The 231 volunteers confirmed that 549 young Ospreys fledged. But because many stewards dropped out and didn’t submit complete data, 549 is a partial figure. Based on that number and the number of nests, Connecticut Audubon estimates that approximately 744 young Ospreys fledged in 2020.

Kate Scimeca will serve as the 2021 Osprey Nation coordinator.

New coordinator
“Although 744 is an estimate, we’re confident that it’s solid and that the state’s Osprey population is strong,” said Milan Bull, Connecticut Audubon’s senior director of science and conservation. “We send a big thank you to the volunteers who stuck it out during a difficult season, and we hope to recruit back those who left.”

Some of that responsibility will fall on the Osprey Nation coordinator, a seasonal position that has been filled by five people over the years.

The 2021 coordinator is Kate Scimeca, a Fairfield resident who has worked for the U.S. Fish and Wildlife Service at the Monomoy National Wildlife Refuge on Cape Cod. She will take over from Brendan Murtha, who performed admirably on an emergency basis last year and was the principal author of the 2020 report.

Among Kate’s first responsibilities are upgrading the Osprey Nation map and working with volunteers to ensure that as many nests as possible are covered. For information about volunteering, email osprey@ctaudubon.org.