Wildlife After Dark: A free Zoom presentation about fishers and other mammals at Deer Pond Farm 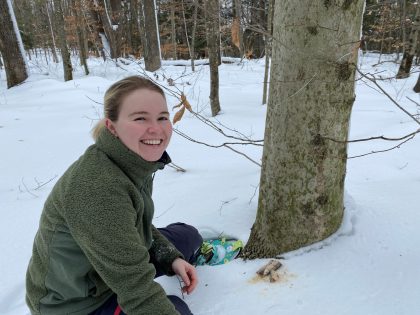 March 25, 2021 — The birds of Connecticut Audubon’s sanctuaries are well-documented. But what about the large, formidable weasels called fishers?

Wildlife biologist Katerina Gillis is working on it.

On Thursday, April 1, at 7 p.m., she’ll walk you through what she’s learned in a special free Zoom presentation filled with amazing images from her game cameras.

Register for the Fishers of Deer Pond, free via Zoom.

Kat is a wildlife conservation and biology student at Central Connecticut State University.

You may know her as the IBA Coastal Ranger at our Milford Point Coastal Center. There she leads the organization’s efforts to protect nesting Piping Plovers, terns, and American Oystercatchers. She discussed that work with us on Zoom late last year.

Since 2018, Kat has placed over 200 game cameras on private and public properties in Connecticut, including our Deer Pond Farm in Sherman. Her target is the fisher — a large weasel sometimes mistakenly called a fisher cat (mistakenly because it doesn’t fish and it’s not a cat).

The game camera work is part of her master’s thesis project on the distribution of fishers in the state. 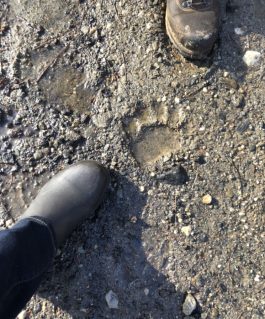 There’s lots of evidence of black bear at Deer Pond Farm, including this track. Sign up for Kat Gillis Zoom presentation to see if she’s captured them on her game camera as well.

Fishers range through much of North America. They were abundant in Connecticut until the 19th century, when logging and trapping all but eliminated them.

They eventually re-established themselves in the northeast part of the state and were re-introduced into the northwest by the Connecticut Department of Energy and Environmental Protection.

Have they found their way down the highlands to Sherman?

It’s not a spoiler to say Katerina found not just fisher but other mammals at Deer Pond Farm as well. The details and her photos offer a rare look at animal nightlife in the thousand-foot hills of western Connecticut.

Kat says fishers require specialized habitat and that if you think you hear fishers screaming at night, you’re probably wrong.

“I’m surprised at how often people think that they have fisher in their backyard just based off of vocalizations when in reality its red foxes and raccoons that vocalize,” she says.