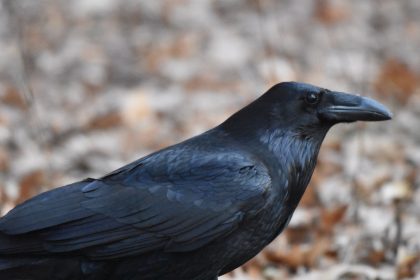 Note the massive bill on this Common Raven. Phot by Gilles Carter.

by Jim Arrigoni
April 28, 2021 — Like Ospreys and Bald Eagles, Common Ravens have recently experienced a remarkable population resurgence in Connecticut.

When Edgar Allan Poe composed The Raven in 1845, the species could be encountered throughout the northeastern United States, but by the turn of the century, it was virtually absent.

Today it is not uncommon to hear their distinctive call when flying overhead anywhere throughout the state, although they tend to prefer less developed areas for their nests, which are typically located on cliffs (such as at West Rock in New Haven) or structures such as bridges, dams, and towers.

Ravens are among the earliest birds to construct nests, sometimes even while snow still blankets the ground in early March.

Common Ravens, American Crows and Fish Crows are very similar in their overall black appearance, and are unlikely to be confused with any other species.

However, Ravens are much larger, by about 50%. This size difference is difficult to gauge unless the two species are side-by-side.

If you are fortunate to witness a Crow harassing a Raven in flight, perhaps to encourage it to depart its nesting territory, it will be very obvious which species is which!

Other useful characteristics for distinguishing the species include a fuller bill and, in flight, a wedge-shaped and pointier tail in Ravens. The throatier croak of the Raven is a dead give-away that is unlikely to be confused with the classic “caw” call of the American Crow or more nasal sound made by the Fish Crow. Males and females look alike.

Like its crow cousins and the Blue Jay, the Common Raven is known for its remarkable intelligence and interesting social behaviors, which were investigated in a popular account by Bernd Heinrich in Mind of the Raven.

Also, it can sometimes be observed exhibiting playing behaviors, such as acrobatic maneuvers in flight, and even dropping and then catching items in mid-air.

Although notoriously wary around people, the species seems to be adapting well to living in the developed Connecticut landscape, and we are pleased that it has returned to grace our skies.