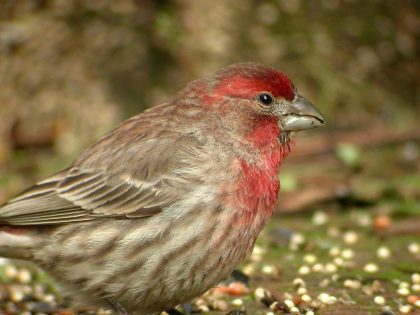 by Joe Attwater
April 8, 2021 — Though year-round residents in Connecticut, House Finches become much more active in spring as they gear up for breeding season.

They’re rarely alone, traveling in small, noisy flocks. Listen for the jumbled song of the males, who may sing throughout the year.

House Finches are native to the western United States and were introduced to the east in 1940, when several birds were let loose on Long Island after failed attempts to sell them as pets. They’ve been very successful, spreading across the entire eastern United States.

House Finches look very similar to our native Purple Finches, which are far less common here than House Finches. But there are a few key field marks to look for to help differentiate them.

Male Purple Finches have more extensive red on their necks and backs, while the red on a House Finch is more concentrated on the head and breast. Males House Finches also have more streaking on their flanks.

Female House finches have blurrier streaks and a less distinct facial pattern than female Purple Finches. In general, Purple Finches are stockier and have heavier bills.

The red colors of the male House Finch comes from pigments in the food it eats, so sometimes the birds will appear more yellow or orange. 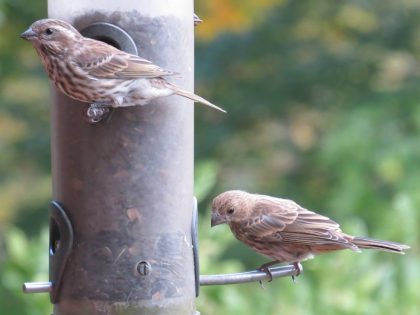 Purple Finch on the left, with an immature House Finch. Photo by Patrick Comins.

Where to find it
House Finches are a common visitor to bird feeders and do well in human-created habitats. They are a familiar sight in parks, suburban neighborhoods, and urban areas, often mixing with American Goldfinch and sparrows. They often nest on buildings, streetlamps, and hanging planters. In their native range further west they inhabit dry deserts, chaparral, and open coniferous forests.

Conservation status
House Finches are common and widespread, and they have generally benefited from human development.

Their global population is estimated to be around 40 million, three quarters of which are found in the US. They experiences a decline in 1994 caused to mycoplasmal conjunctivitis, which caused respiratory problems and red, swollen eyes. This made them more susceptible to predators and exposure to the elements, and the disease can affect other bird species.

You can help House Finches and the other birds at your feeder by cleaning your feeders and changing the seed regularly, which will help decrease the spread of disease.