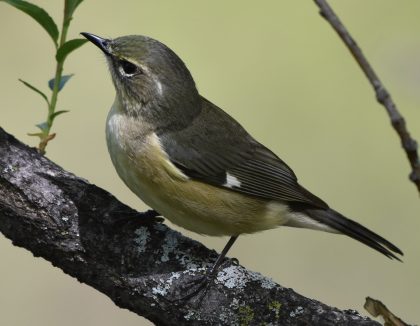 Female Black-throated Blue Warbler. “Yhey usually show a single mark that confirms their identity – a small white patch in the bend of the wing.”

by Greg Hanisek. Photos and videos by Gilles Carter
May 25, 2021 — The Black-throated Blue Warbler, stunningly unique in its adult male garb, is quite average in other ways.

It’s never as rare or hard to find as a Mourning Warbler, and never as abundant at the height of migration as a Yellow-rumped (Myrtle) Warbler, or a Palm Warbler.

It doesn’t fit the mold of confusing fall warblers either. Once the adult males attain their alternate (breeding) plumage, they maintain that appearance year-round.

Their sexual dimorphism is extreme, however. The females bear virtually no resemblance to the males. They’re almost uniquely nondescript, to the point that no other warbler looks like them.

Fortunately for the puzzled observer, they usually show a single mark that confirms their identity – a small white patch in the bend of the wing, like an old-fashioned pocket square.

Actually, the adult male has one too, but the male is so immediately recognizable that you don’t notice what’s a standout field mark on its mate.

The species typically arrives from its Caribbean wintering grounds in late April and peaks during the warbler high point in May. In fall they pass through from late August to mid-October, with a few lingering longer. As with a number of warbler species, the final appearances have been getting later.

Black-throated Blues nest in our state and can be rather easy to find in their preferred habitat in the Northwest Corner.

They prefer shady woodland understory, and our birds are especially attracted to Mountain Laurel thickets. Their wheezy songs announce their presence. 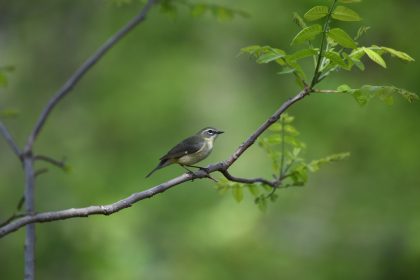 Note from Tom Andersen, Communications Director: I originally asked Greg Hanisek to write about Black-throated Blue Warblers in early May, thinking it would be perfect for the peak of migration. Other tasks got in the way, mainly Migration Madness, so I held it till now.

With migration waning, Greg’s penultimate paragraph, about their nesting locations, prompted me to check eBird for June and July of recent years, and indeed the number of pins clustered in the Northwest part of the state is impressive.

But so is their abundance. I found this note, below, on eBird from Jory Teltser, one of Connecticut’s more active young birders, who calculated that there were 82 Black-throated Blue Warblers in the Mount Riga area of Litchfield County, when he was birding there with another young birder, Will Schenck, on June 25, 2018:

“Mathematically calculated based on frequency of singing males per every stop. I covered over 7 miles of territory, so this is an expected high count. There was no overlap in birds counted, because point counts were spaced far enough apart. This seems like a crazy high count, but if anything I would say it’s a conservative estimate and that I missed many more (I only saw males!). Stops several hundred feet apart, starting at the base of the mountain. Point counts stopped about 1500ft over the border in Massachusetts.

“In addition to this, much of the time spent on the mountain was walking trails around the peak, where singing males where heard and seen everywhere. In total, I estimated around 50-100 males heard just from the road side. I suspect there are well over a hundred singing males on this mountain. I would guess that this is mountain has the highest density of this species anywhere in the state.”