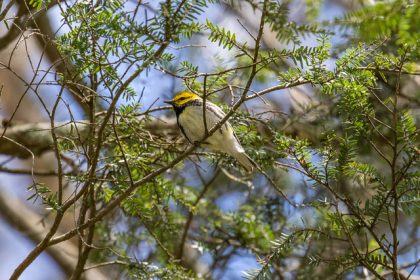 by Christopher S. Wood
June 3, 2021 — One of the perils of birding is the affliction known as “warbler neck.” And Black-throated Green Warblers (Setophaga virens) are adept at causing it.

From high in the pines or hemlocks of our Connecticut woodlands, the distinctive, buzzy “zee, zee, zee zoozee” (or “See, See, See Suzie”) song of the Black-throated Green advertises its presence and invites prolonged studies through binoculars until 1) the bird is spotted or 2) your neck gives out.

But the eventual observation of this relatively common and widespread Connecticut breeder is worth the effort, as is the case with most of our warblers.

Its bright gold face stands out against the deep green of the trees it frequents and its vitality shows through its active, and effective, gleaning of (mostly) caterpillars.

As with most of the warblers, early spring does often provide opportunities for closer looks, as hungry migrants more or less ignore birders while they recover from their overnight flight. Connecticut Audubon’s Birdcraft Sanctuary in Fairfield is a great place to see these and many other warbler species in May. 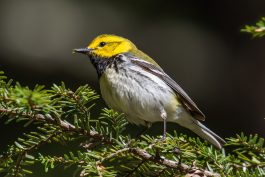 Nesting season, though, finds Black-throated Greens farther north among the evergreens, at places like Whittemore Sanctuary in Woodbury, White Memorial in Litchfield, and Steep Rock Reservation in Washington.

They are another of the many birds that rely on relatively unfragmented forest blocks, highlighting the importance of protecting such places as development and climate change affect habitat availability.

More than a black and gold trinket in the trees, however, Black-throated Greens exemplify the fascinating evolutionary history of the wood warblers (Parulidae). One of a group of species (called “superspecies”), they are closely related to the very localized Golden-cheeked Warbler of Texas, the Hermit Warbler of the far west, and a western counterpart, the Townsend’s Warbler (Setophaga townsendi). 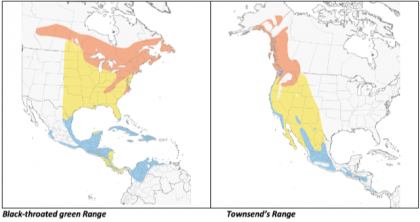 These distribution maps from Cornell’s Lab of Ornithology illustrate the clear delineation of the ranges of these two species except for a very small part of central Canada, where they have been known to hybridize.

This speciation probably resulted from the repeated ebb and flow of glaciation and resulting periods of isolation of warbler populations during the Pleistocene epoch. So when you finally get a good look and your neck straightens out, think about this little bird’s +/- 12,000 year journey to becoming our neighbor and sharing our little corner of the world.

Christopher S. Wood, of Woodbury, has been contributing bird articles and photographs to Connecticut Audubon since 2017.