Not a Zabulon skipper or an American snout: a rare harvester at Birdcraft 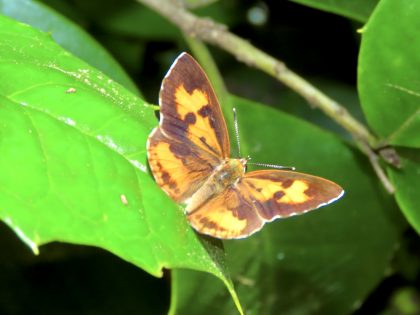 “In the Sanctuaries” is an occasional feature written to give you an inside look at interesting sightings, projects, news, and natural phenomena at Connecticut Audubon sacntuaries around the state. You can receive “In the Sanctuaries” by text if you sign up here.

“On my way back to the building I saw two orangish butterflies chasing each other around by the deck,” Patrick explained. “They looked too big to be the normal Zabulon skippers, and I thought perhaps I had found some American snouts.

“But then one landed on the holly. It was a harvester! Our only carnivorous butterfly.

“This was only the second time ever that I had seen one and the first time ever in Connecticut. Last time I had to drive an hour each way, walk for about an hour and then search for them for another hour. This time they were right at Birdcraft!” 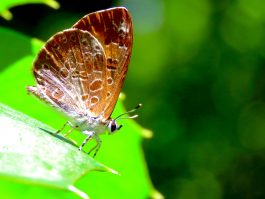 The harvester’s wingspan is no bigger than an inch and a quarter. Although it is carnivorous, that doesn’t mean it feasts on lamb chops. The preferred meat of the caterpillar stage of the harvester (Feniseca tarquinius) is aphids. The adults have no taste for flower nectar; instead, they favor aphid honeydew, which aphids secrete after sucking sap from trees.

Butterfliesandmoths.org shows only about 30 confirmed sightings in Connecticut over the years, including one seen in 2019 at the Sturges Ponds Open Space in Fairfield.