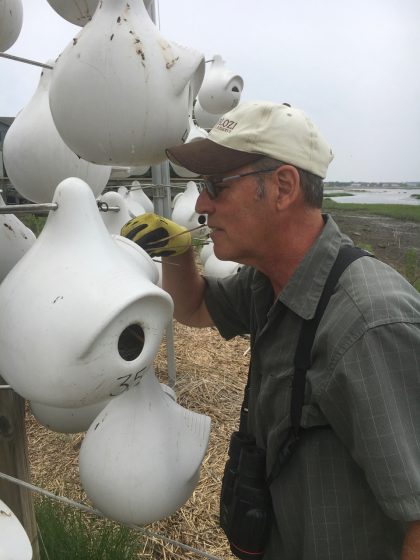 In the Sanctuaries …
June 8, 2021 — Six weeks after they returned from their wintering grounds, Purple Martins are laying eggs in the cluster of nest gourds at the Milford Point Coastal Center. That’s right on schedule.

The team of volunteers and staff that monitors and maintains the gourds conducted its weekly check on Friday, June 4, and found eggs in 19 of the 71 gourds — a total of 76 eggs in all.

Martins were building nests in 39 gourds, so it’s likely that many more eggs will follow.

The success of the martin colony at the Coastal Center is a result of the support of Connecticut Audubon’s members and volunteers. Donations from across the state, and especially from members who “adopt” a gourd for $60, help pay for the equipment and staff time needed to make sure the martins survive.

It’s one of the many ways members can have a direct and positive influence on bird conservation. The martins can use your help still, so please consider adopting a gourd.

Connecticut Audubon is also working to establish Purple Martin colonies in Old Lyme, outside the Roger Tory Peterson Estuary Center; at Trail Wood, in Hampton, where Tree Swallows have nested in the martin house; and at Deer Pond Farm, in Sherman, where martins have been approaching the gourds in spring but haven’t nested yet.

Purple Martins are North America’s largest swallow. Over the decades, they’ve come to depend on man-made houses and artificial gourds. The success rate of the nests and eggs rises considerably when the gourds are checked and maintained regularly.

For years, Purple Martins were considered a threatened species in Connecticut. But the success of colonies at Milford Point, Sherwood Island State Park, Hammonasset Beach State park and elsewhere, and the discovery in recent years or several colonies that were unknown to conservation officials, led to a reassessment. 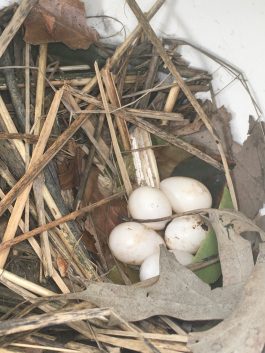 Recently-laid eggs at the Coastal Center. Photo by Frank Mantlik.

Purple Martins are now considered a species of special concern and are no longer threatened.

The Milford Point colony is one of the state’s most successful, thanks to the ongoing support of Connecticut Audubon’s members and the hard work of the Purple Martin team there.Last year, martins nested in 37 of the gourds at Milford Point, and 144 birds fledged.

Connecticut Audubon staff erected gourds at Deer Pond Farm in 2019. It stands next to a pond, in an open area downhill from the sanctuary’s offices. Purple Martins have visited regularly but have yet to nest. Stefan Martin said it’s typical for young birds to scout out new locations before they’re ready to breed.

To encourage them, he’s placed two decoys on the gourds. He’s also set up a call box that plays the sounds of a martin colony from dawn til mid-morning in hopes of convincing them that it’s a good location.

“This is typical of what it takes to get a colony started — a few were here last year, more this year,” Stefan said. “You can expect that for a couple of years. Or you can get them to build a nest as soon as they find it.”

For now though they’re just checking it out. But the signs are good.

Interested in keeping up via text with what’s happening in our sanctuaries? Sign up for occasional “In the Sanctuaries” news.