Thanks to the support of members, donors, and volunteers, Connecticut’s environment saw important progress in many areas over the last year Ospreys, Piping Plovers, and Purple Martins all thrived. Important laws were passed. Key parcels of land were preserved.

And thousands of adults were again able to safely go birding, walk the trails, and enjoy the natural world at Connecticut Audubon’s sanctuaries. 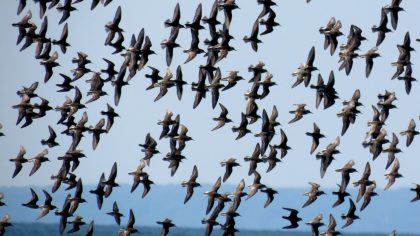 Advocacy
A nationwide grassroots advocacy effort that included members of the Connecticut Audubon Society saved the long-standing protections of the country’s most important bird protection law.

The U.S. Fish and Wildlife Service announced this year that it was revoking changes made in 2018 that weakened the Migratory Bird Treaty Act.

The changes made it legal for people or businesses to harm or kill birds as long as they didn’t do it intentionally.

Those protections had been in place since the law was enacted more than a century ago. The changes prompted legal action and an outpouring of protest from conservation groups and bird advocates.

Connecticut Audubon’s members and advocates were a big part of that. You sent almost 1,300 messages to Washington D.C. on the issue. 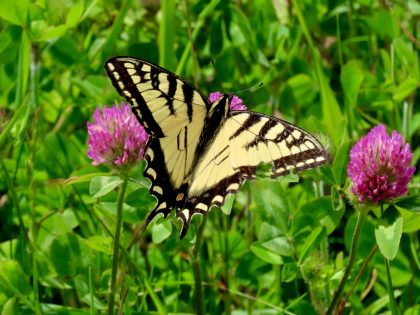 Sanctuaries & Land Preservation
Open land in Connecticut is important for a couple of obvious reasons. Wildlife of all kinds find homes and migration stopover spots in the forests, grasslands, wetlands, and shrublands. Connecticut residents enjoy the trails and the chance to see birds and other animals.

But increasingly we are learning that open land has a crucial role in managing the effects of climate change. Connecticut’s open lands store vast amounts of carbon and have the potential if managed and restored to store twice as much.

And those lands are equally important for birds and wildlife.

Steadfast support from members and volunteers allows Connecticut Audubon to manage and improve its 21 sanctuaries. These include the 2,200-plus acres of the Croft Preserve in Goshen, the Bafflin Preserve in Pomfret, and Deer Pond Farm in Sherman.

In Fairfield, a friends group has restored sections of the Larsen Sanctuary, and volunteers are continuing their work at the Smith-Richardson Preserve.

Among the leaders of the Friends of Larsen is Misty Beyer, a recipient of our 2021 Dave Engelman Volunteer Benchmark Award. Co-recipient Shawn Bay is responsible for major improvements at the preserve’s Farm Pond. Read about Misty’s and Shawn’s work here.

Another recipient of the Engelman Award this year is Tyler Luciani, whose volunteer work has improved the entrances and trail safety at several sanctuaries, including Birdcraft in Fairfield. You can read about Tyler’s work here.

We have also added more than 100 acres to our sanctuaries in the past year.

Connecticut Audubon has been a leading advocate of land preservation investment, through the state’s Open Space and Watershed Land Acquisition Grant Program and Recreation and Natural Heritage Trust Program. We have been an advocate for funding that in 2021 allowed the state to permanently protect 600 acres in Goshen near the Croft Preserve.

Science in Nature
Over 14,000 students from 72 schools across 29 towns learned the basics of good conservation through the Science in Nature program, even while schools were adjusting to the pandemic.

Science in Nature provided them with kits for each student to carry out activities and experiments in the classroom, the field or at home. The kits included trays, hand lenses, rulers, graduated cylinders, soil, thermometers, water samples and more.

Connecticut Audubon teacher-naturalists created online learning for students, and support materials for teachers, to be conducted on several platforms.

EcoTravel
Almost 1,400 people learned more about conservation and the environment (and about birds in particular) by traveling on one of EcoTravel’s 56 trips over the past year.

Overnight trips throughout the United States have been the mainstay of EcoTravel’s work since the onset of Covid. International travel is now starting to come back. Trips have been booked for Tanzania, Costa Rica, and Iceland, and confirmed bookings are almost double what they were a year ago.

These trips often require volunteers to lead them. Among the best is Jim Sherwonit, who is a recipient of our Dave Engelman Volunteer Benchmark Award this year. Read about how Jim has helped travelers get more from their trips here. 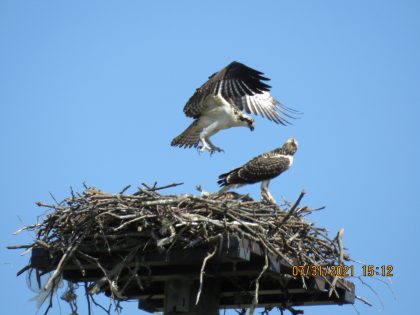 The nest-by-nest monitoring and data collection found that almost 600 pairs of Ospreys nested in the state in 2021, an increase of 130 percent since 2015. The number of young birds that have fledged each year has also gone up by 130 percent. In 2021 there were approximately 826 fledglings!

Because Ospreys eat only fish, their health depends on a large and healthy population of small fish, in particular menhaden. If pollution reaches the fish population, it’s likely to show up in the Osprey population. That’s what happened to DDT in the Silent Spring era.

Your support helped create Osprey Nation and is allowing it to grow. As a result, conservationists have a better understanding of how Ospreys are doing. 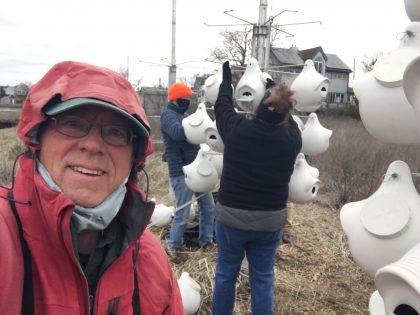 Frank Mantlik took a selfie with the Purple Martin crew at the Coastal Center. Connecticut Audubon staffer Jim Arrigoni and volunteer Lori Romick are in the background.

Purple Martins
A decade ago Purple Martins were listed as a threatened species in Connecticut. But diligent stewardship by people across the state has helped the population grow, and the Purple Martin’s status has improved to where it’s now no longer threatened but is considered a species of special concern.

Diligent stewardship is necessary because Purple Martins rely on the help of people to survive. They nest only in artificial gourds and in houses erected atop tall poles. Their colonies thrive when the nests are monitored regularly throughout the April-August nesting season.

Member support has led to success and growth at the Purple Martin colony at the Milford Point Coastal Center, where 44 pairs of martins nested in the gourds in 2021.

Approximately 50 Connecticut Audubon members contributed to the “adopt a gourd” program, and a core team of volunteers and staff checked the nests each week, providing the support needed to keep the colony going.

One of those volunteers, Lori Romick, is a recipient of Connecticut Audubon’s Dave Engelman Volunteer Benchmark Award for 2021. Read more about her work here.

While the Coastal Center colony grew, martins made new homes in 2021 in nest sites at Connecticut Audubon’s Bafflin Sanctuary in Pomfret and at Deer Pond Farm in Sherman.

All three sites provide near-ideal conditions for Purple Martins: an open landscape to soar through, ample flying insects to eat, and dedicated staff and volunteers to keep the nests in good shape. 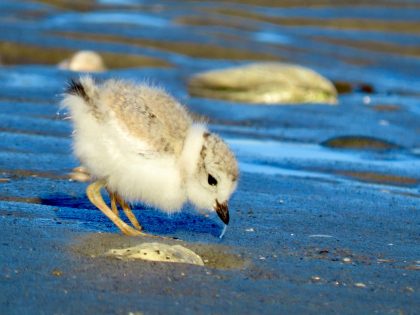 Shorebirds & Coastal Waterbirds
Things looked dire for the vulnerable Piping Plovers that breed on Connecticut’s beaches. Piping Plovers are a threatened species. As recently as 1998, there were only 21 pairs, from Greenwich to Stonington. And those 21 pairs raised only 22 babies.

That changed when, with the support of members, Connecticut Audubon became part of an alliance of groups created to protect Piping Plovers and other coastal waterbirds — the Audubon Alliance for Coastal Waterbirds.

Your support paid for a coastal ranger to patrol the sandbar at the Milford Point Coastal Center from April til September. It supported Connecticut Audubon’s conservation biologists as they worked with partner organizations to organize volunteers, put up fencing, and create new signs throughout the state.

Even in the pandemic season of 2020, when field work was severely hampered by social distancing, 58 pairs raised 58 babies. (Official numbers from 2021 aren’t available yet.)

Piping Plovers share the beach with dozens of other shorebird species. As it becomes more clear that shorebird numbers are dropping, providing them with places to rest and feed during migration is becoming more important.

Over the last two nesting seasons, in partnership with other organizations, Connecticut Audubon began a campaign to raise awareness of shorebird habitat. The focus was on reducing disturbance to shorebird flocks at Sandy Point in West Haven, Stratford Point in Stratford and MIlford Point.

Cooperation from visitors was the key. Analysis of the effort continues but the work seems to have had a dramatic positive impact on reducing disturbance.

The success of the Piping Plovers and the shorebird protection work are a direct result of your generosity and your commitment to Connecticut’s birds and other wildlife. Thank you!