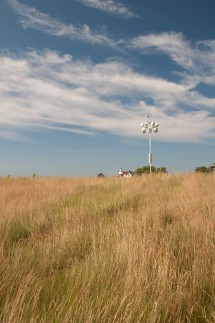 Stratford Point protects 20+ acres of coastal grassland and some 12 acres of shallow intertidal shoreline. The site harbors numerous rare and unusual species and its habitat is continually being improved through management practices and other means, such as the placement of artificial nest sites like these Purple Martin gourds

Opening Hours: The Lordship Coastal Grassland Habitat Management Area on Stratford Point and the associated shoreline is now operated by Audubon Connecticut, not the Connecticut Audubon Society. The shoreline is accessible after hours using an access path located just north of the main access gate, along the chain link fence that borders the site. Parking is available there. Please do not enter the upland areas of the site if the gate is closed and no staff is present to protect the site’s fragile ecosystem and its wildlife.

Habitat and description: Stratford Point is a peninsula in the Lordship section of Stratford located near the mouth of the Housatonic River. The site consists of approximately 28 acres of upland and an additional 12 acres of shallow intertidal zone. The upland area supports a nice coastal grassland and a small dune system with early successional coastal vegetation, while the mostly gravel and rock-covered shoreline contains some remnant stands of saltmarsh vegetation. Stratford Point is an important migratory stop-over site for a variety of birds, lepidoptera and odonates, and provides valuable wintering habitat for waterfowl.

Stratford Point is located between two subunits of the Stewart B. McKinney NWR (the Wheeler Marsh in Milford and Great Meadows Marsh in Stratford) and is surrounded by several additional natural areas (e.g. Long Beach/Pleasure Beach, Connecticut Audubon Society Coastal Center at Milford Point, Charles Island, Silver Sands State Park). In the aggregate, these areas include a wide range of critical habitat types for a substantial number of Greatest Conservation Need species (CT Comprehensive Wildlife Conservation Strategy) as well as species listed in the state’s Threatened and Endangered Species Act.

Historically, Stratford Point was home to the Remington Arms Gun Club which operated a trap and skeet range there from the early 1920s until the mid-1980s. Accumulated lead shot in the upland and intertidal portions of the site as a result of the gun club’s activities was removed during large-scale remediation in 2000-2001 by the owners of the site, DuPont/Sporting Goods Properties. Subsequent spot removal of residual lead shot and environmental monitoring is ongoing. Connecticut Audubon Society functions as a caretaker for the site, oversees habitat management practices and carries out biological monitoring studies and coastal habitat restoration studies for DuPont.

A White-tailed Kite with a Common Tern in hot pursuit. One of the several rarities that have been seen at Stratford Point recently

Stratford Point is an important stopover site for migratory shorebirds and for wintering waterfowl. Many thousands of shorebirds and ducks of a variety of species can be found here during the right time of year.  In addition, the early successional coastal habitat in the site’s upland area harbors grassland species, such as American Kestrel, Northern Harrier, Savanna Sparrow, Bobolink and occasionally Eastern Meadowlark, while the dense, brushy tangles along the site’s perimeter have yielded scrubland species such as Brown Thrasher.

Several extreme rarities have shown up on the site in the past two and a half years that avian monitoring programs have been in place. Stratford Point’s bird list includes species such as Eurasian Wigeon, White-tailed Kite, Brown Pelican, Cave Swallow and Clay-colored Sparrow, while older records include Red-headed Woodpecker and Western Kingbird. The current list includes 196 species and is growing steadily still. Bird surveys are carried out daily by our Science and Conservation staff to monitor habitat and resource use by local waterfowl but we always keep an eye out for additional rarities.

In 2010, Science and Conservation staff completed a shoreline stabilization and coastal habitat restoration feasibility study for Stratford Point. With support from DuPont and The Nature Conservancy we will be implementing a coastal restoration plan in 2011 to bring back intertidal salt marsh habitat to the site and to create a series of novel “soft” erosion control features that will help stabilize the eroding shoreline and ultimately lead to the formation of high quality sand dune habitat along the low-energy side of Stratford Point. A long-term adaptive management plan will be implemented to facilitate the creation of coastal dune and coastal meadow habitat. These globally rare natural communities are home to a variety of endangered plants and animals. We hope that by creating this habitat we can provide a home to some of the state’s rarest species.