Birds & Plants at the Coastal Center

August 4, 2022 update:  Our Purple Martins in Gourd #26 have successfully fledged.  Please visit again next spring to view our Purple Martin Nest Cam.   Below, you can review some of the reports from the weekly nest surveys conducted by staff and volunteers. 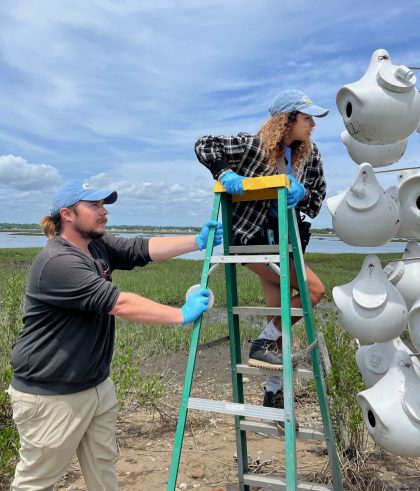 Look for Purple Martins in and around any of several dozen colonies of man-made houses or gourds throughout Connecticut.

In the eastern U.S., these large swallows are completely dependent on them (though out west, they nest in natural cavities too).

All the successful colonies in Connecticut are near water. The birds soar and glide over lakes, tidal marshes, and grassy and shrubby fields, searching for flying insects, especially dragonflies, often at such heights that they’re impossible to see with the naked eye.

There’s a colony of 71 gourds at the Coastal Center at Milford Point. Connecticut Audubon staff and volunteers check the nests weekly throughout the breeding season; as of the most recent check, on July 29, 23 gourds this season had active nests. On this day there were only 4 gourds still containing chicks. Our tally suggests that an additional 21 chicks have fledged since last week; plus we watched one fledge out of #13. The total number of eggs was 4 (unviable); the total number of chicks was 16. We saw fewer adult and fledgling Purple Martins flying around the colony. We checked all gourds to make sure there were no late new eggs laid. Many of “our” adults and fledglings have begun their southward migration.

Each year, supporters of the Coastal Center “adopt” a gourd for a $60 donation. The funds go directly toward maintaining, repairing, and replacing the gourds, and are essential to the success of the colony. Adopting a gourd is a great way for you to do something direct and effective for Connecticut’s birds.

All told, there might be as many as three dozen colonies in the state, including smaller and newer colonies at the Center at Pomfret and Deer Pond Farm, and well-established colonies at Sherwood Island and Hammonasset State Parks, and at the Quinebaug Valley Fish Hatchery in Plainfield. Kent seems to be a particularly good area for them.

A total of 315 bird species have been seen at the Coastal Center. Ospreys nest in the marsh. Highly vulnerable species such as Piping Plovers and American Oystercatchers nest on the beaches. Snowy Owls often spend the winter in the area. Thousands of shorebirds congregate in August and September.

The nearby waters of Long Island Sound and the Housatonic River are rich in oysters and clams. The dune habitat supports rare plants. A thriving population of Purple Martins occupies a colony at the edge of the marsh.

Four observation platforms are available to wildlife viewing, as are the beaches. We also have a newly-established pollinator garden. We ask visitors to keep a respectful distance from all wildlife.

Coming Up At the Coastal Center