Trail Wood is the former home of Edwin Way Teale and his wife Nellie. Edwin was a well-known and influential author of 27 original books on natural history, science, and photography. In 1959, the Teales left their home in Baldwin, Long Island, to escape the crush of humanity, moving to Trail Wood in Hampton. 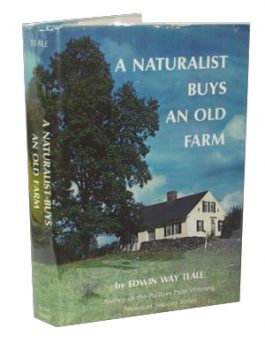 Here they spent the rest of their lives examining every feature of the 156 acres they affectionately called “our Eden.” They named each trail, pasture, and corner so they could share the news of their daily rambles if they went out separately. The Connecticut Audubon Society has maintained the original site and trail names adopted by the Teales. 12 acres were subsequently added, bringing the current property size to 168 acres.

Edwin had the habit—more common in the mid-twentieth century—of compounding nouns in less typical ways. Examples at Trail Wood include North Boulderfield, Nellie’s Summerhouse, and Starfield Pasture. We’ve maintained that practice on all sanctuary signs and maps. 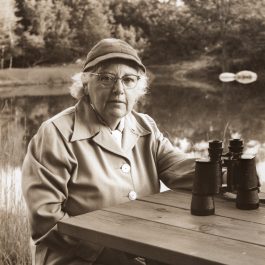 Ten of Mr. Teale’s books were written at Trail Wood, including his 1966 Pulitzer Prize winner, Wandering Through Winter—the first natural history text to win a Pulitzer during the twentieth century. His last two books published during his lifetime, A Naturalist Buys An Old Farm and A Walk Through the Year, feature Trail Wood as their subject.

Edwin died of prostate cancer on October 18th, 1980. His study remains as he left it in 1980, per Nellie’s request. In 1981, she deeded Trail Wood to the Connecticut Audubon Society, as she and Edwin had agreed to do. Nellie lived here for 13 years after Edwin’s death. She died in 1993.

Today, Trail Wood is managed by the Connecticut Audubon Society with help of numerous volunteers.  Start your own adventure. Join us!