The Story of Deer Pond Farm 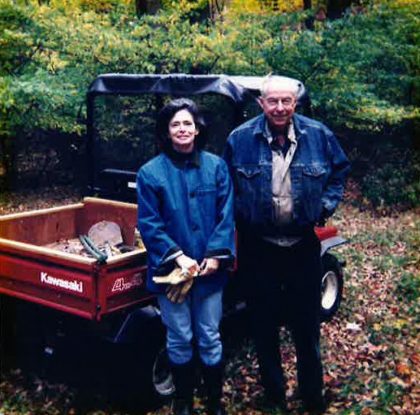 Deer Pond Farm: a gift from the late Kathy and Walter Wriston
The generosity and foresight of the Wristons cannot be overstated.  We are extremely grateful to be able to conserve this property forever as open space.

The Connecticut Audubon Society received a generous bequest in 2017, from the estate of Kathryn D. Wriston, of 850 acres of rugged hardwood forest, meadows, and wetlands straddling the state border of Sherman, Connecticut, and Pawling, New York.

Called Deer Pond Farm by the Wristons, the property includes a network of 20 miles of trails. All trails are accessible from the visitor parking lot at 57 Wakeman Hill Road, Sherman, CT.

The sanctuary is now open year-round, seven days a week, from dawn to dusk. Parking and access to all trails is at 57 Wakeman Hill Road, Sherman.

The Wriston bequest gives the Connecticut Audubon Society a major location in the western part of the state, to go along with its centers in Fairfield, Milford, Glastonbury, Pomfret, and Old Lyme. The bequest also includes an endowment to manage the property and conserve it as wildlife habitat.

Deer Pond Farm sits in the highlands along the Connecticut-New York border. About 620 of its 835 acres are upland forest; 125 acres are forested wetlands, and 59 acres are meadow. About 100 species of birds have been reported on or near the property during breeding season, including forest birds such as Broad-winged Hawk and Scarlet Tanager, marsh birds such as Virginia Rail, and birds such as American Woodcock, Eastern Towhee, and Chestnut-sided Warbler, which nest in young forests or shrubby areas.