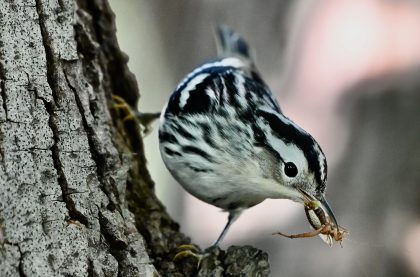 On this page
Size
What’s interesting
Birds of Birdcraft
Facilities
“Birdcraft: A migration magnet surrounded by tarmac and concrete” (from Connecticut State of the Birds 2019)

Trails
A short all-access trail including a boardwalk loops around the pond.

It was created in 1914 by Mabel Osgood Wright, who founded the Connecticut Audubon Society in 1898, after seeing an inspiring play about the creation of a bird sanctuary in New Hampshire in 1911.

The Sasqua Garden Club maintains the gardens near the sanctuary’s buildings. A recirculating waterfall provides a source of fresh water in all but the coldest months.

Birds
In Connecticut, Birdcraft is virtually unmatched in the number and diversity of songbirds you can see and hear in a small area during migration. 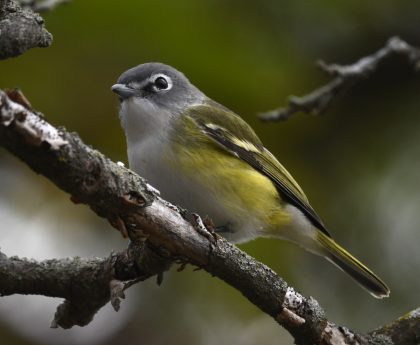 The sanctuary has been hemmed in by development. That isolation has made it an oasis for migrating birds searching for a green patch to rest and feed.

Every warbler that can regularly be found in Connecticut has been seen at Birdcraft.

Plus thrushes, mimic thrushes, vireos, flycatchers, blackbirds, woodpeckers, and others. The diversity can make for an astonishing place to be on a spring morning.

Connecticut Audubon’s team of licensed bird banders has been operating at Birdcraft since the 1970s, and has banded more than 34,000 birds of more than 135 species.

Connecticut Audubon’s Board chair, Kathleen Van Der Aue, wrote about Birdcraft in the 2018 Connecticut State of the Birds report, which was titled, “In Cities and Suburbs: A Fresh Look at How Birds are Surviving in Connecticut.” The text of her article is below.

A Checklist of Birds found at Birdcraft Sanctuary

Facilities
Birdcraft’s main building is open during normal business hours. Bathrooms can be found inside.

News and program information
For information about bird walks and other programs at the Birdcraft, click here.

Birdcraft: A migration magnet surrounded by tarmac and concrete

by Kathleen Van Der Aue, Chair
Before Mabel Osgood Wright founded the Connecticut Audubon Society’s Birdcraft Sanctuary in 1914 she was offered a choice of two locations in Fairfield, one a large pastoral site several miles from the center of town and the other a smaller site near the town center, within a short walk of the railroad station and the Boston Post Road.

Mabel was a visionary in the conservation movement, with a passion for educating the public about birds, so she chose the more urban site because it would make the sanctuary more accessible to foot and train travelers. Visionary though she was, probably even she could not have anticipated how this little refuge has become surrounded by human encroachment, now bordered by three schools, I-95 and a highway rest area. The building of I-95 in 1954 took half the sanctuary, leaving little more than five acres for wildlife.

One may well think the place is too small to be of any use for birds, but this couldn’t be further from the truth. The very fact of its location, surrounded by tarmac and concrete, makes it a migration magnet. I saw this myself when I flew over it once in a small airplane and saw a tiny patch of green with a pond, cars whizzing by on I-95 on one side and the schools and train tracks on the other. It is easy to imagine the attraction for an exhausted bird, having flown all night and looking at first light for a place of safety with food and shelter for the day.

Since the 1970’s we have documented the spring and fall migrations at our Birdcraft banding station. We’ve banded over 34,000 birds of more than 135 species. Each spring the sanctuary fills with color and song as eager migrants rest and refresh on their way north to breed. In the fall they return, quieter and less colorful but just as much in need of food and rest as they head south. Almost equally as numerous are the birders, who have learned that it’s not unusual to see and hear 15 to 20 species of warblers at Birdcraft in one day.

We get our rarities from time to time but it seems the sanctuary is most important in the fall for young birds on their first migration. Eighty-two percent of the birds banded in the fall of 2017 were hatch-year birds. For the 10 most common species we banded in fall 2017, here are the percentages of hatch-year birds (courtesy of Darlene Moore, a member of the Birdcraft banding team): White-throated Sparrow, 73%; Gray Catbird, 93%; American Robin, 100%; Eastern Phoebe, 100%; Northern Waterthrush, 62%; Common Yellowthroat, 81%; Hermit Thrush, 100%; American Redstart, 70%; Song Sparrow, 89%; and Ruby-crowned Kinglet, 71%.

We also document the nesting birds who call the sanctuary home. Though small in area, dozens of species nest at Birdcraft. In spring 2018 we recaptured a returning catbird bearing a band that I had put on more than 12 years earlier, likely returning each year to a site where it has found nesting success. Our favorites are a pair of Downy Woodpeckers, male and female, captured together in the net. We saw they wore old bands with consecutive band numbers, indicating that they had been banded together.  We consulted our records and found they had been adult birds when we banded them three years earlier, giving “site fidelity” a new meaning.

Published in Connecticut State of the Birds 2018