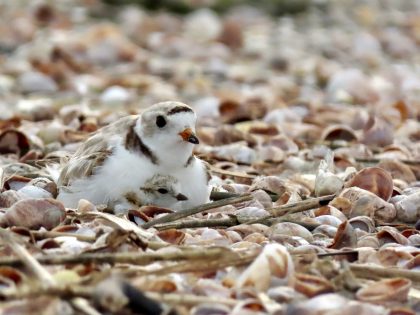 
Our sanctuaries are open daily year-round, dawn to dusk.

Size
8 acres, but the sanctuary is bordered by the Milford Point section of the McKinney National Fish and Wildlife Refuge, the Charles E. Wheeler Tidal Marsh, and Long Island Sound. Together they make up a vast and unique ecosystem, and visiting experience.

The sanctuary is owned by the Connecticut Department of Energy and Environmental Protection and operated and managed by Connecticut Audubon.

the terrain is generally level although footing on the sandbar can be tricky depending on the tide.

Trails
There’s a short boardwalk through the dunes to the beach and sandbar, and a short loop trail through the woods. 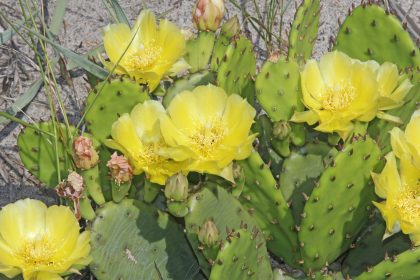 What’s interesting
Start at the parking lot observation platform for an overview of the marsh and its birds.  Look for the Purple Martin colony, where as many as four dozen of these large swallows nest each year.

Beyond is the Charles E. Wheeler Salt Marsh, which covers 625 acres of Spartina grasses, mudflats, and tidal channels.

Near the Center building, a small circulating waterfall, installed in 2019, provides fresh water to the otherwise-dry point, and attracts so many birds that people have taken to calling it the Magic Fountain.

The pollinator garden features a dozen native plants that attract Ruby-throated Hummingbirds and scores of insects.

Follow the path to the boardwalk through the dunes. Look for prickly pear, Connecticut’s only native cactus, and beach plum. Seaside goldenrod blooms in profusion in September and October. Scores of monarch butterflies feed on the goldenrod as they migrate.

A lip of salt marsh forms the edge of the tidal lagoon. Beyond, the sandbar extends far towards the mouth of the Housatonic, its surface crunching underfoot from the shells of millions of oysters, clams, whelks, and slipper shells.

Connecticut Audubon is a participant in the Audubon Alliance for Coastal Waterbirds. Working under the auspices of the CT DEEP, the Alliance uses a large team of volunteers and staff to protect the nesting areas of vulnerable beach-nesting birds throughout the state.

You’ll note the warning signs, the string fencing and the wire cages — exclosures — on the beach and the sandbar.

The string fencing serves as a “do not cross” line to ensure that nesting terns, Piping Plovers, and American Oystercatchers have enough room to lay and incubate eggs, and to rear their young. The exclosures are erected over Piping Plover nests to allow those birds to come and go while also keeping predators out.

These nesting birds are protected by federal law, and it is essential that visitors respect these boundaries. 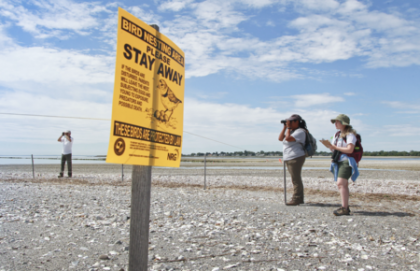 Birds
The sanctuary is one of the best birding locations in New England, for diversity and abundance. Well over 300 species have been recorded there, including 40-plus species of shorebird.

In fall, winter, and spring, Brant by the thousands feed in the marsh and the shallows. Thousands of Sanderlings and Semipalmated Sandpipers feed and rest there during migration. Peregrine Falcons swoop by looking for a meal.

Black Skimmer and Whimbrel are occasional but not unexpected visitors. Piping Plovers, American Oystercatchers, Least Terns and Common Terns all nest on the sandbar.

It’s rare to not see birders with scopes and cameras on tripods, and they often turn up rare species: Roseate Spoonbill, Wilson’s Plover, American Avocet, and Black-headed Gull are among the rarities seen there since 2019.

There are several Milford Point eBird Hotspots. This one is a good place to start.

Other wildlife
Red Fox live on the point and can often be seen hunting on the sandbar. White-tailed deer find cover in the thick vegetation of the upper dunes, and two rare insects — salt marsh tiger beetle and marginated tiger beetle — also live in the dunes, as do plenty of black-legged ticks and lone star ticks. A fisher visited several winters ago, and a beaver hauled out of the salt water in the spring of 2021.

Facilities
The Coastal Center buildings include bathrooms, a small nature shop, and a main room with a panoramic view over the marsh.

News and program information
For information about bird walks and other programs at the Coastal Center and the Smith-Hubbell Sanctuary, click here.

For news about the sanctuary and the Coastal Center, click here.