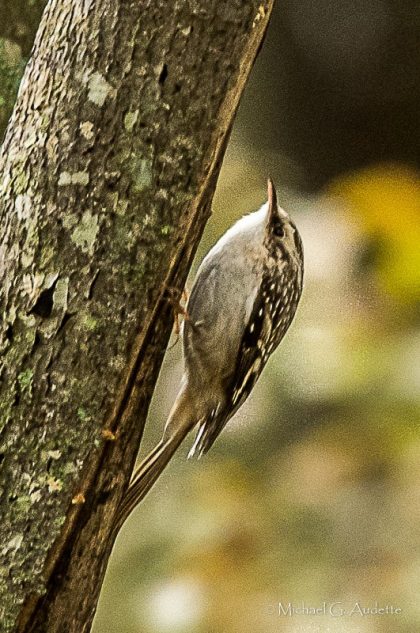 On this page:
Size
Trails
What’s interesting
Birds of the Croft Preserve
Other wildlife
Facilities

Directions via Google
Note that the preserve entrance is not well marked. It is on the right as you drive north on East Street North.

Trails
Unmarked. The Croft sanctuary is primarily managed for wildlife, and trails are very muddy and steep in places, making them challenging to navigate. There is a long logging road trail that leads from the parking area to the interior, and passes the large habitat restoration area.

What’s interesting
Connecticut Audubon manages about 15% of the preserve as young forest or shrub-scrub habitat, for mammals such as New England cottontail and birds such as Brown Thrasher, Blue-winged Warbler, and Indigo Bunting whose populations are declining in New England. The land was clear-cut in the early 2010’s. Some timber was removed but many branches and limbs were left to provide habitat for insects and amphibians; brush piles were created as cover for birds and mammals.

Birds
Raptors include Red-shouldered Hawk and Red-tailed Hawk; Northern Goshawk has nested in the preserve in the past. Acadian Flycatcher, Yellow-bellied Sapsucker, Brown Creeper, and Winter Wren are among the more northerly species that nest on the preserve.

Other wildlife
The Croft Sanctuary is one of three Connecticut Audubon preserves that harbor known populations of the rare New England cottontail rabbit (the Larsen Sanctuary in Fairfield and the New York portion of Deer Pond Farm are the others). The New England cottontail is a habitat specialist, unlike the more common eastern cottontail, and requires areas of thick shrubs and tangles. The two species of rabbit are almost identical looking.

Facilities
There is a small unmarked parking area along the road. No bathrooms.